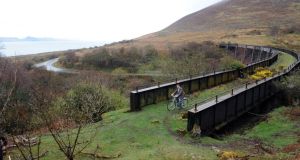 Lands needed to complete a €4 million greenway cycle route high over the Ring of Kerry are to be acquired through compulsory purchase order because grant funding will run out if the project is not completed by December 2016, councillors have been told.

The mechanism by the Kerry County Council will force a number of the 116 landowners along the old Glenbeigh to Kells route to sell gardens, according to the council, which says it is under financial as well as time pressure on the project. The old railway line is now in private ownership, having been simply handed to adjoining landowners with the sudden closure of the iconic line in 1960.

At proposal stage for some time, the 26km project was announced amid great fanfare by then minister of state for transport Alan Kelly, before agreement was reached with all of the landowners involved. As well as running along the spectacular Kells viaduct over Dingle Bay, it also runs through farms and back yards.

Since that announcement just weeks before the local elections, Kerry County Council, which took over the idea originated by the South Kerry Development Partnership, has held “a series of meetings” and has reached hammered out agreement with more than 100 of the 116 landowners involved. Ten however have said they will not sign up to the deal.

“Where possible, each of the landowners has been met individually on at least one occasion,” the report said. “Many landowners have been met on multiple occasions. As agreed, a second series of group meetings with the landowners has now been completed.” While it was possible to agree alternative routes with some, there were a number of locations along the old line where changing the route was simply not possible.

Amid strong objections on the use of a compulsory purchase mechanism, particularly by the Independent councillor Johnny Healy-Rae, county manager Moira Murrell agreed to allow one last set of approaches to the objecting landowners.

However, there was little prospect of agreement and the CPO would be progressing in January, councillors were told. “The CPO will take 12 months and we have to get it off the ground or funding may be gone,” Ms Murrell said.

The council management has rejected calls to increase the land purchase price from €15,000 an acre for outright purchase – in most cases, far less than one acre is involved.