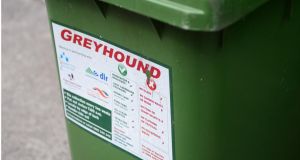 Householders are set to pay more for their bin collections from this month following an increase in levies for disposing of waste at landfill sites.

Increases in the charge for collection of a black bin are being imposed by most waste firms. However, they are not being applied to all customers equally.

The levy for disposing of waste at landfill facilities was this week increased by Minister for the Environment Phil Hogan from €65 to €75 per tonne. No direction has been issued by the Minister on whether the levies should be absorbed by the waste firms or imposed on households. However, firms have said it would not be commercially viable for them to carry the cost.

“We are very aware of the harsh economic times that we live in and empathise with you during these times. However, we are not immune from Government austerity,” the company told customers. “This is a 15 per cent increase in operating cost to our business. Unfortunately, this is a tax imposed by the Government of Ireland on the people of Ireland.”

Panda increase
Panda has this week increased the cost of bin tags by 60 cent, but only for its customers in Fingal; charges for householders in Dún Laoghaire-Rathdown remain the same.

“When we went into Dún Laoghaire-Rathdown we said we wouldn’t raise charges before 2014 so we’re locked into that,” a spokesman said.

Thorntons has raised its black bin collection charge by 50 cent for those on pay-by-lift contracts in Dublin, Meath and Kildare, but not Wicklow. Managing director Gary Brady said the company had taken over existing businesses in Wicklow and the charges were slightly higher than for its other customers. “We’re leaving the Wicklow charges as they are to try to standardise the prices.”

City Bin managing director Niall Killilea said charges for Dublin customers would not be increasing. A small percentage of customers outside Dublin who were on pay-by-weight charges will be paying an extra one cent per kilo.