Climate talks are not worlds away from flooded homes 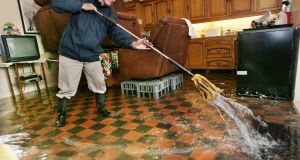 An Irish householder mops up flood water in his kitchen. Serious floods on the scale experienced over the weekend in places such as the west of Ireland were once budgeted for once in a hundred years - now they’re happening much more frequently. File photograph: Matt Kavanagh/The Irish Times

The massive floods that have caused such devastation in the west of Ireland - and even more so in northwest England - are not the first such “extreme weather events” that coincided with a UN climate summit, but they are a harbinger of things to come if the climate crisis is not tackled.

At COP19 in Warsaw two years ago, Philippines climate envoy Yeb Saño could not hold back tears as he told delegates about the catastrophe that was being wreaked on his country by Super Typhoon Haiyan, and appealed to “stop this madness” by committing to cut greenhouse gas emissions.

“I speak for the countless people who will no longer be able to speak for themselves after perishing from the storm,” he said.

It is unlikely that Minister for the Environment Alan Kelly will make a similar appeal on behalf of all the people in west Cork and elsewhere who are now slopping out their flooded homes - not least because agriculture, Ireland’s sacred cow, could be at least partly responsible for aggravating it.

Nobody can say with any certainty that the latest extreme flooding in Ireland and Britain has been caused by climate change. But storm surges, high rainfall and gale-force winds are precisely the type of extreme weather events that climate scientists have warned about for years.

Serious floods on the scale experienced over the weekend in the west of Ireland and in Cumbria were once budgeted for once in a hundred years. But now they’re happening much more frequently, causing widespread devastation that will make many homes uninsurable in the future.

Not surprisingly, most people believe the right response to more frequent storms is to build flood defences, such as those in Fermoy, Co Cork, and Clonmel, Co Tipperary.

Indeed, it is the lack of such engineered protection in Bandon, Co Cork, that’s blamed for the severe flooding there.

But campaigning columnist George Monbiot argued in January 2014 that “too little public spending [on flood defences] is a small part of problem. It is dwarfed by another factor, which has been overlooked in discussions in the media and statements by the government: too much public spending.”

In a lengthy column published by the Guardian, he wrote that “vast amounts of public money - running into the billions - are spent every year on policies that make devastating floods inevitable”.

The chief culprit he identified was the EU’s Common Agricultural Policy’s payments regime.

Hill farmers can receive up to €450 per hectare to stock their land with sheep. “This money should be renamed the flooding subsidy: it pays for the wreckage of homes, the evacuation of entire settlements, the drowning of people who don’t get away in time, all over Europe,” according to Monbiot.

He focused in particular on a requirement of the regime that land should be free of “unwanted vegetation” in order to qualify.

Land with belts of trees that would play a major role in holding back flash-flooding is not eligible for the “special mountain payment” being dished out by the EU.

“Instead of a steady flow sustained around the year by trees in the hills, by sensitive farming methods, by rivers which are allowed to find their own course and their own level, to filter and hold back their waters through bends and braiding and obstructions, we get a cycle of flood and drought.”

I put the points made by George Monbiot to the Department of Agriculture in Dublin - ironically, where the National Emergency Co-ordination Centre is housed - asking whether Ireland was similarly afflicted. After five reminders by email to its press office, I finally got a response two months later.

The department noted that Ireland does not contain mountainous areas such as the Alps, where the highest subsidy of €450 per hectare is paid out. As a result, our hill farmers are paid €96 to €109 per hectare for “mountain-type grazing”, up to a maximum of 44 hectares in total.

It said there was “no reason why farmers in Ireland have to remove scrub or trees” to qualify for these payments, and “no incentive” for them to do so. And while there was “no headage payment” for sheep farmers, they do benefit from a “grassland sheep scheme” which was worth €15 million in 2014.

According to the department, there has also been a reduction in the overall number of sheep in recent years “which has, by and large, alleviated the issue of over-grazing” and the focus now was on “maintaining and even restoring commonages, where appropriate”.

Many people in Ireland still seem reluctant to take climate change seriously, on the basis that it’s not immediately relevant to their lives. But there is little doubt that the latest flooding and severe winter storms that have lashed the west coast are part of a pattern.

Indeed, the British Met office has highlighted the “potential role of climate change” in the ferocity of Storm Desmond and the devastating floods it caused in Cumbria.

The same applies to the west of Ireland too.

Pubs not to reopen and restrictions to remain on all gatherings, Cabinet decides 18:42
Court approves €35,000 payment to family of infant who died hours after birth 18:36
Former TV presenter dies after car enters water in Co Down 18:02
Ireland needs to move to ‘zero-Covid’ policy to avoid catastrophe, scientists say 17:48
Coronavirus: 45 new cases but no further deaths reported in the State 17:46