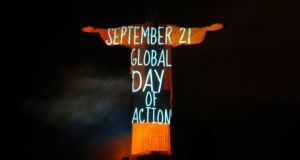 The statue of Christ the Redeemer in Rio de Janeiro is lit up with a message announcing a global mobilisation over climate change – the People’s Climate march, a demonstration to raise awareness about climate change, was held yesterday around the world, in advance of the United Nations Climate Summit tomorrow. Photo: Reuters/Pilar Olivares

The last time so many world leaders gathered to talk about climate change, it was an unmitigated debacle: the 2009 Copenhagen summit – intended to chart a international treaty – collapsed amid a welter of recriminations and set back the effort to deal with global warming.

This time in New York it’s different, or so they say. UN secretary-general Ban Ki-moon expects each president, prime minister or potentate to pledge what his or her country will do to help achieve the agreed goal of capping the rise in average global surface temperatures at 2 degrees.

Stressing that there can be no “plan B” because there is no “planet B”, he said he had invited leaders from governments, cities, business and civil society to showcase what they are doing to promote “transformative change”, as the world “needs to see what countries are already doing to reduce greenhouse gas emissions.”

Ban’s theme since he became secretary-general in 2007 has been that “solutions exist and we are already seeing significant changes in government policies and investments in sustainable ways of living and doing business . . . The race is on, and now is the time to for leaders to step up and steer the world towards a safer future.”

His stance was endorsed last week by a new report from the Global Commission on the Economy and Climate – involving such heavyweights as the World Bank, the International Monetary Fund and the OECD – which insisted that the problem could be fixed if governments steered the global economy on a low-carbon pathway to prosperity.

Adding to the pressure for real progress has been a vast gathering of climate activists from all over the world for NYC Climate Week, organised to coincide with the UN summit. Ban himself even took part in the People’s Climate March through Manhattan yesterday, joining a colourful spectacle with a serious purpose – to save the planet.

Also in New York are the mayors of major cities across the globe, led by the Big Apple’s former mayor Michael Bloomberg, now UN special envoy for cities, as well as many of the world’s major corporations – some of them making significant pledges to cut their own contributions to climate change, others indulging in little more than greenwashing.

Cities , where more than half of the world’s seven billion people now live, are seen as crucial in winning the battle against global warming. Local initiatives to build public transport networks, promote walking and cycling or reduce energy consumption in buildings are all making a difference – even in countries where climate policies are weak.

Although Chinese president Xi Jinping is skipping the summit, China will be touting its progress in promoting renewable energy as well as plans to launch the world’s biggest carbon market next year. Countries such as Chile and South Africa are planning to impose carbon taxes, following the example of nearly 40 others worldwide.

Inevitably, there will be a strong focus on what US president Barack Obama will tell the summit about what he intends to do to deal with a crisis that his secretary of state John Kerry has described as ranking “right up there” with other global threats such as terrorism, poverty and the proliferation of weapons of mass destruction.

But with little or no prospect of the US Congress adopting climate change legislation or ratifying whatever agreement is finally reached in Paris, Obama’s chief negotiator Todd Stern has been pressing for the deal to be billed as an “accord” rather than a treaty that would require formal approval by a still highly sceptical US senate.

China and the US, the world’s two largest economies (and largest polluters), are already collaborating to “decarbonise” their economies and lead a “global clean revolution”. Underlining the significance of this effort, Kerry said: “We are working hard to find a solution together that can have an impact on the rest of the world.”

As for Ireland, a minnow in this context, Taoiseach Enda Kenny will be able to tell other leaders that the Government has (finally) prioritised its Climate Action and Low Carbon Development Bill, with a view to having it enacted by early next year at the latest. Climate campaigners gave this move an “A+” rating.

Ban Ki-moon’s one-day summit is intended to inject fresh impetus into the long-running UN climate negotiations by getting more than 120 world leaders to address the issue; his hope or expectation is that a draft negotiating text will be produced at this year’s annual conference in Lima, leading to an agreement in Paris next year.

With 2014 shaping up to be one of the hottest years since records began, environmental groups and other non-governmental organisations are keeping a hawk eye on the process – ready to shout “foul” if it starts going astray and dish out “Fossil of the Day” awards to those who are perceived to be not playing fair.

Climate change is, after all, the “defining issue of our times”, as Ban himself has said. But it is still an open question whether the words spoken by world leaders in New York tomorrow will be translated into action on the ground – and in time to avert an intolerable warming of the planet.