Attenborough tells Greta Thunberg she has made ‘astonishing’ impact

Swedish teenager’s parents say they made changes to save their daughter, not climate 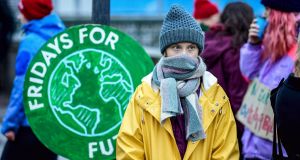 Swedish environmental activist Greta Thunberg at a climate strike arranged by the organisation “Fridays For Future” outside the Swedish parliament Riksdagen in Stockholm. Photograph: Pontus Lundahl/TT via AP.

Greta Thunberg has thanked broadcaster Sir David Attenborough for helping to inspire her into climate activism.

The Swedish 16-year-old said that watching documentaries about the natural world when she was younger “opened her eyes” to what was happening with the environment.

Greta, who was guest editor of BBC Radio 4’s Today programme where she chatted to Sir David on Skype, said: “Thank you for that because that was what made me decide to do something about it.”

Sir David (93) described the impact she has made as “astonishing,” adding: “She has achieved things that many of us who have been working on it for 20-odd years have failed to achieve and that is you have aroused the world.”

Greta started a school “strike for the climate” outside the Swedish parliament in August 2018, which has since spread all over the world to involve more than 100,000 schoolchildren.

The teenager’s campaigning message that the world belongs to young people is “a very powerful one,” according to Sir David, who told the youngster: “You have made it an argument that people have not been able to dodge.”

He told Greta: “We don’t want to spend our time marching through the streets but we have to. People of my generation should be very grateful to you.”

She is currently on a gap year from her education and heads back to school in August.

She has suffered with depression and feels her activism has been like a medicine.

She told Radio 4: “It really helps in getting out of that depression because it gives a feeling you are having an impact.”

Greta added: “Just being part of a movement that has so much impact on the world is an amazing feeling. I wish that more people could feel like that.”

Speaking on the same BBC Radio 4 Today programme, Greta’s father said he and his wife made changes in their lives to “save” their daughter rather than the climate.

Svante Thunberg said his 16-year-old daughter “fell ill” three or four years before going on school strikes, and stopped eating and talking to others.

Asked how she got better, he said he and his wife - opera singer Malena Ernman - took time off from their work and sought help from doctors.

Mr Thunberg added that changes made in their own lives - including his own decision to become vegan - gave Greta energy.

His remarks came during a special edition of the BBC Radio 4 Today programme guest-edited by Greta.

Mr Thunberg said of her climate change activism: “We thought it was a bad idea, just the idea of your own daughter sort of putting herself at the very front line of such a huge question like climate change.

“You wouldn’t want that as a parent.”

He said they spoke several times with Greta before she pursued her campaigning, explaining that she would have to do it by herself and be well prepared for questions she would face - praising her response.

Mr Thunberg also talked about the difficulties that his daughter, who has been diagnosed with Asperger’s syndrome, experienced with depression.

Asked how she got better, Mr Thunberg said: “We just took a very, very long time to spend a lot of time together and just work it out together.”

He said Greta thought her parents were “huge hypocrites” because they were active advocates for refugees, noting that his daughter would ask “Whose human rights are you standing up?” given that they were not taking the climate issue seriously.

Mr Thunberg said his wife stopped flying and had to “change her whole career”.

He added: “To be honest, she didn’t do it save the climate - she did it to save her child because she saw how much it meant to her, and then, when she did that, she saw how much she grew from that, how much energy she got from it.”

He said he “became vegan” and Greta “got more and more energy” from this.

“I knew they were the right things to do because I understood the facts at that time, but I didn’t do it to save the climate, I did it to save my child,” he said.