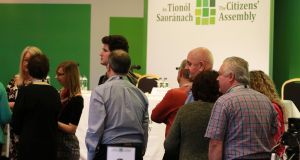 A meeting of the Citizens’ Assembly in April 2017. Photograph: Nick Bradshaw

Irish citizens, businesses, community groups and other organisations are missing out on an opportunity to voice their concerns on climate change, according to an alliance of leading environmental groups.

The Citizens’ Assembly has sought the public’s views ahead of two of its sessions, on September 30th and November 4th, on “how the State can make Ireland a leader in climate change”.

In spite of the success of the assembly on other issues, “very few individuals have submitted recommendations” in advance of a deadline later this week, the Environmental Pillar said. The group is a coalition of 26 national environmental non-government organisations which promote protection of the environment and environmental sustainability.

“This is a unique moment for the people of Ireland to decide the constitutional basis for a framework that reflects the significance of climate change and its impacts, as well as our commitment to safeguarding an environment that supports our wellbeing both for now and for future generations,” said spokesman Niall Sargent.

Success on other issues illustrated how the assembly could prompt possible changes to the Constitution, and in this instance to environmental legislation and regulations, he said, adding that it was an important opportunity for individuals and those in business to voice their concerns, and to make suggestions in how to respond to climate issues directly affecting them.

It was also a way of gathering the views of across different generations of Irish people, Mr Sargent said.

Submissions are invited on all issues in relation to climate change, but in particular the assembly said it would like to hear views on how Ireland’s energy, transport and agriculture sectors can be improved to reduce their impact on the climate.

“This is a real chance for everybody concerned about climate change to have their voice heard. Whoever you are, whatever your expertise, wherever you’re located – the Citizens’ Assembly want to hear from you.”

The assembly is a randomly selected group of 100 people, broadly representative of the Irish electorate, brought together to consider some of the most important issues facing Ireland’s future. Their conclusions and recommendations on the topics they discuss are sent to the Houses of the Oireachtas for further debate.

The Dáil resolution that established the assembly states that the Government will respond to each recommendation it makes.

A workshop is being staged on Tuesday at 5pm in the Students’ Union Kitchen in Trinity College Dublin, to help individuals and organisations wishing to make a submission. It is being hosted by Young Friends of the Earth Ireland, TCD Students Union, the campaign group Fossil Free TCD and SCC.

Submissions to the assembly can be made online or by post until 5pm on Friday, August 11th. Further details are available at citizensassembly.ie