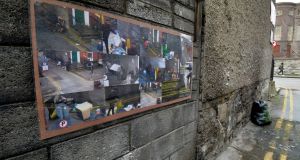 The Data Protection Commissioner has contacted Dublin City Council over its use of images of people captured on CCTV illegally dumping household waste.

The council last week erected a poster in a litter blackspot in the north inner city, showing 12 people caught on CCTV dumping rubbish on the street.

The faces are slightly blurred, due to the quality of the CCTV footage, but they would be able to identify themselves, as most likely would their neighbours, the council said.

The poster has been bolted to a wall behind a Perspex shield at Frankfort Cottages, near the Five Lamps, one of the city’s worst areas for illegal dumping. CCTV cameras were installed a number of weeks ago and they had some effect in reducing dumping.

However, within a day of the poster going up last week, the street was clear.

“It was remarkable. For the last 10 years we’ve had signage there warning people not to illegally dump, but every day we would have to clear up bags, and sofas and other furniture, and even builders’ rubble, but this poster has made such a difference,” said John McPartlan, public domain officer with the council.

“Officials from this office have contacted the DCC in relation to the publication of CCTV stills.

“It should be pointed out that the processing of personal data must be done fairly, demonstrate proportionality and not be overly prejudicial to the fundamental right of the individual to data privacy.”

Mr McPartlan said he would be responding to the commissioner this week.

“We have to make a case that our use of the images is proportionate response to the issue, and our view is that it is, because illegal dumping leaves the city in a terrible mess.”

He added the council had published no names and no personal information.

The poster shows people dumping refuse sacks and smaller supermarket bags, as well as a woman dumping a suitcase and two young men dumping a sofa.

The council in December 2013 announced a “blitz” on dumping black spots in the city where residents leave their rubbish in the streets instead of paying for waste collection.

It established a north inner city litter action group which has gone door to door asking people to provide proof they are disposing of their waste legally, and has had some success in persuading households to sign up to pay to have their bins collected.

However, no measure has had the instant effect of the poster. Local Independent councillor Nial Ring said he and other local councillors “fully endorsed” the measure.

“This is the nearest we can get to a name and shame policy. I would recommend that we get more CCTV cameras and put up more posters because it has got results.

“We don’t want to be in the Ibal relegation zone, we want to be the Leicester City of the litter league.”

1 Prepare for six months of Covid-19 restraints, warn health officials
2 Covid-19: Seventy cases in Cork traced to local pubs and restaurants in recent weeks
3 Speed and distance of Covid-19 droplets tracked by Mater researchers
4 Almost a third of Garda firearm discharges found to be accidental
5 No joy for consumer with a faulty Husqvana chainsaw
Real news has value SUBSCRIBE