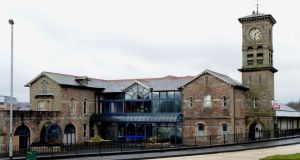 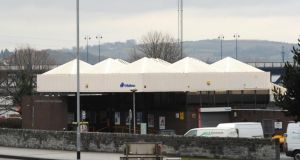 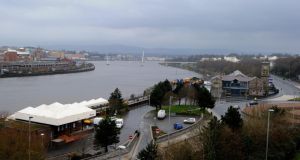 
Derry should mark its year as UK City of Culture by reinstating its old railway station on the Waterside – the last surviving Victorian rail terminus in Northern Ireland, according to local lobby group Into the West.

The building, with its distinctive Italianate clock tower, ceased being used as a station in 1980 and was then converted to office use. Owned by Donegal-born Pat Doherty, who heads Harcourt Developments, it is currently for sale.

Translink, which runs Northern Ireland Railways, has accepted that the replacement station – described as an “egg-box structure” by Eamonn Mc Cann, of Into the West – is no longer fit for purpose and a report has been commissioned on future options.


Foyle
Consultants have been asked to look at various options for “a new/replacement railway station in Derry/Londonderry” that would make use of the new Peace Bridge across the river Foyle to improve links to the city centre and bus services. The choice is between refurbishing the existing “egg-box”, building a new station, purchasing and refurbishing the old railway station building . . . building new platforms and realigning the track and signals or doing nothing, which is not really seen as a viable option.

If the option of reinstating the old railway station is not chosen, Into the West has warned that “an opportunity will be missed to stimulate the regeneration of the commercial area of the Waterside” by conserving the North’s last Victorian rail terminus.

Into the West says reusing Lanyon’s impressive building and incorporating a cafe, a newspaper and book shop and heritage exhibits would be “an ideal fulfilment of the proposal for a civic/public building” recommended by a masterplan for the area.

The group, which is supported by Derry’s Walled City Partnership, envisages that an open plaza could be developed on the river embankment alongside the reinstated station, “showcasing the best of our past and our confidence in the future”.


Upgrade
Into the West played a leading role in the campaign to get the track between Derry and Coleraine upgraded. The upgrade is being carried out in phases, with the first phase to be completed by March 25th, when the railway service will resume.