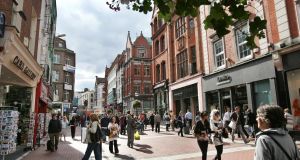 Buskers in Dublin city centre have been accused of blocking access to shops and tediously rendering “woeful karaoke versions of popular elevator hits” in a series of complaints to the city council.

One business bemoaned the din created by buskers on Grafton Street and said it had resorted to providing noise-blocking earphones for everyone in the office. Another said certain performers were contributing nothing to the environment or culture of the city.

Dozens of complaints were filed to the council in a three-month period following the enactment of bylaws governing street performance. These were released to The Irish Times under the Freedom of Information Act but the names of the complainants were redacted.

One lengthy submission to the council complained that the quality of some of the acts was “very poor” with “out of tune instruments played very badly, singers who really can’t sing”.

The submission also claimed enforcement was “more or less non-existent”. The complainant said many of the buskers had hit 100dB, well exceeding the 80dB limit.

A complaint about a busker playing a flute outside HMV in June was critical of his limited repertoire.

“We have already had My Way twice, Danny Boy twice, One Moment in Time and Yesterday. He is making his way through all the hits,” they said.

The manager of one shop complained several times about a dance troupe blocking off the street and the front of the premises.

A business at Henry Street said it was impossible for staff to be productive while buskers were playing loud music outside, including one playing “awful trash on a loud synthesiser”.

A piano player, however, was praised as “the acceptable face of busking” and one business said his was the sort of music that should be encouraged. “He is fairly unique amongst the buskers in that he is talented, well able to play the piano, which is properly tuned.”

Dublin City Council said it had one authorised officer working full-time, including after normal working hours and at weekends, on enforcing the bylaws.

Warning notices have been issued to 110 performers and 30 performers have incurred €75 fines for repeated breaches of the laws, the council said.