Blitz on illegal dumping in Dublin comes up roses 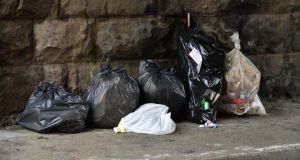 More than half of households targeted in a Dublin City Council crackdown on illegal dumping have now signed up to pay their waste charges.

Almost 580 households in the north inner city, one of the worst litter black spots in the State, were targeted in the council’s campaign to stop domestic rubbish being dumped in the city streets. The removal of illegally dumped bin bags cost the council €670,000 last year.

Some 320 of those have now signed up to have their rubbish disposed of by an authorised waste collection service.

The council has said it will move to prosecute remaining individuals who continue to ignore the legal requirement to have waste disposal arrangements in place.

The council in December 2013 announced a “blitz” on dumping black

spots in the city where residents leave their rubbish in the streets instead of paying for waste collection.

However, the results were not what it hoped, with three Dublin districts last year among the four dirtiest places in the State, according to the anti-litter league assessment of 40 urban areas carried out by An Taisce for Irish Businesses Against Litter.

The north inner city had the worst litter problem in Dublin and the second worst in the State after Farranree in Cork.

Last September, the council began a “zero tolerance” crackdown on illegal dumping, concentrating on the north inner city where it installed CCTV cameras and undertook inspections of homes. Owners of properties suspected of illegal dumping were identified through property and title searches.

Since September, 55 per cent of homes targeted have signed up to pay waste collection charges. The council said it now wants to intensify this campaign to eliminate the problem and is asking the public, particularly in the north inner city, to report illegal dumping to a confidential litter hotline on 1800 251 500 or online at fixyourstreet.ie.

The council will this morning unveil a new street sweeping fleet as part of its efforts to clean up the city.

“Dublin City Council is now very proactive in tackling this crisis. We are prosecuting those who dump illegally on our streets and we are also prosecuting the householders that have no legal waste disposal arrangements in place,” Lord Mayor Críona Ní Dhálaigh said.

“We will do all we can to ensure that the north inner city is no longer a litter black spot. I would encourage everyone to share this civic responsibility and report illegal dumping.”