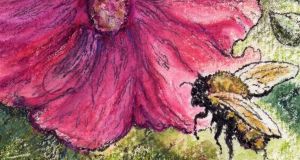 Urban sprawl across the space of the natural world is not without redemption. Foxes prowl dustbins and dog bowls. Squirrels share peanut tubes with birds. Venturesome hedgehogs and badgers may be lured to feed from nightly plates on the lawn.

Each wave of PR for wildlife brings a rush of human recompense and efforts to amend, if only in switching to paper cups. But it can also bring a quite new engagement with nature. Along with nestboxes and frog ponds, gardeners who grow the right sort of flowers for pollinators may go on to foster hives for honeybees.

In Brighton, my birthplace, urban bees now find ample nectar and pollen within much shorter flights than their rural cousins in Sussex. This shows up in the dances they perform outside the hive, culminating in the “waggle dance” with which they share foraging directions. Videoing and decoding the dances, researchers at Sussex University conclude that “urban areas can support honey bees year round”.

In Berlin, a hive of green endeavour, the new profusion of beehives can bring problems. Some 10,000 colonies now produce the swarms that need capturing for new hives, or to find new homes such as holes in trees.

In a quite natural reproductive cycle, beginning in early summer, a swarm is formed when a queen bee leaves the hive together with tens of thousands of protective workers. They typically cling together on a nearby branch before sending out scouts to prospect for a new home.

This dark, glittering, buzzing mass can disconcert unaware humans. In June, a reader photographed such a swarm in the parkland of Dublin’s Farmleigh House and asked uneasily if it might be a hornets’ nest.

A swarm of bees is actually remarkably docile, its attention concentrated on the queen and not rushing to sting anyone. It may calmly be shaken off its branch on to a white sheet in a cardboard box. This is then laid out for processional entry to a vacant hive.

In Berlin, many inexperienced beekeepers have lacked such skill and care, and swarms have moved on to improvise new homes on hotel balconies, car roofs, traffic lights and other unrewarding locations. The German beekeepers’ association now has a corps of swarm-catchers – schwarmfänger – reachable by hotline to cope with such incidents.

In Ireland, a similar service is provided by a network of more than 100 beekeepers, North and South, formed last year and alerted by emails to the website swarms.ie. Among its respondents in Dublin this summer was Lynn Fitzpatrick, called to capture a swarm that had settled on the ground outside Garda Commissioner Drew Harris’s office at Garda headquarters in the Phoenix Park. She found the commissioner pleasantly appreciative.

Fitzpatrick will overwinter the swarm and hopes to set up a hive at the headquarters next spring, ideally having trained a Garda beekeeper. Such zeal in promoting and often managing new colonies has earned her election as ambassadorial “Honey Queen” by the Federation of Irish Beekeeper Associations.

Establishing urban rooftop apiaries is among the many aims of the All-Ireland Pollinator Plan 2015-2020. In one practical support, the Department of Agriculture, Food and the Marine has hives on the roof of its headquarters in Dublin’s Kildare Street. Another, with Fitzpatrick’s help, sends bees foraging from the Central Revenue office in Cathedral Street.

The business world, too, has started to sign up to the pollinator plan. Fitzpatrick’s latest rooftop is in the city’s financial services centre, where property company JLL has engaged her to establish and manage an apiary atop the glossy facade of La Touche House.

This, too, is good PR for imaginative and eco-friendly businesses at the heart of a “smart” city. In Britain, however, the same researchers who study Brighton’s bees have cast a somewhat sceptical eye on rooftop hives as corporate green credentials.

In the journal Bee World, Karin Alton and Francis Ratnieks of Sussex University’s Laboratory of Apiculture have asked if the hives are Practical Beekeeping or Publicity Stunt. They list some of the better-known examples of the UK’s rooftop apiaries, such those at the London Stock Exchange, Fortnum & Mason and the Scottish Parliament building in Edinburgh. Comparing the logistics of rooftop and ground-level beekeeping, they go on to relate a series of “problematic incidents” caused in recent years by vagrant swarms.

Panic among Piccadilly shoppers, disruptions of trade, diners fleeing a restaurant without paying . . . central London has clearly had its alarms. Expert location and management will be needed even in Dublin’s airier, more open and far greener city.

Even in open countryside, honeybees can prove unruly. In the years of our own hives (sadly curtailed by sudden allergy), Ethna once reached a swarm too late and saw it wavering away up the hillside. At the mountain fence she met a neighbour and explained why she was out of breath. “Did they go away on you?” he commiserated. “I thought your bees were tame.”