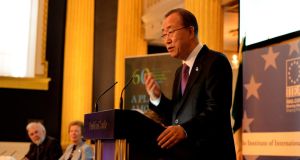 “Ireland’s imprint has been huge and historic, well out of proportion to the country’s size and your population,” Mr Ban told attendees at an event marking both the United Nations 70th anniversary and the launch of a programme of events to mark Ireland’s 60th year as a member of the organisation.

Among the attendees were Minister for Foreign Affairs Charlie Flanagan and former president and UN special envoy for climate change Mary Robinson, as well as former taoiseach Liam Cosgrave.

Mr Ban noted that, despite the economic crisis, Ireland had continued to provide aid to other countries.

However, he said Ireland must maintain its leadership and momentum on climate change, adding that climate change and food security were intrinsically interlinked.

“Ireland has been a champion of efforts to counter hunger, but today one cannot be a leader on hunger without also being a leader in climate change,” he said.

“I encourage Ireland to align its climate effort with its admirable engagement on hunger,” Mr Ban said, adding that the issue required both Ireland and Europe’s strong engagement and leadership.

He said for too long the response to climate change had been hindered by national interests and unreliable science. However he said it was now “clear that climate change is happening because of human beings...it’s also human beings who have to answer”.

‘We have to adjust’

“Nature does not negotiate...We have to adjust ourselves to this changing situation. We are facing a tipping point; we may just fall into chaotic situations...or if we take action now, today, it may not be too late.

He praised Ireland for its continued involvement in UN peacekeeping operations, its contributions to the Belfast Agreement and for becoming the first country to have introduced same-sex marriage through a popular vote.

“Ireland voted on marriage but in the process you have also decided to fully include members of the LGBT community in the life of this nation,” he said.

At the end of the address, Mr Ban quoted WB Yeats: “I have believed the best of every man. And find that to believe is enough to make a bad man show him at his best, or even a good man swings his lantern higher”.

“Human beings have remarkable gifts, ideas, passions and compassion. If we used that great wealth...we can set the world on a better course,” he said.