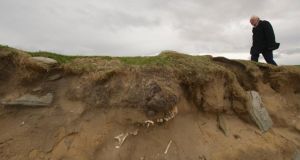 Padraig Lavelle in a cíllin, or children’s graveyard, at Dugort, Achill Island, Co Mayo, which was damaged by recent storms, exposing some remains. Photograph: Keith Heneghan/Phocus.

When René Böll spent summers as a young child on Mayo’s Achill island, he remembers scrambling over rocks and exploring places that were taboo – the cilliní or graveyards for premature, stillborn and unbaptised children.

“There was no stone, no mark, no names,” the artist and son of Annemarie and writer Heinrich Böll recalls. “No one talked about it, and you might pass over one without even knowing it was there.”

Many of the island’s 20 such sites were in remote places, or on cliff edges and coastal margins, reflecting a sense of shame at the time about the birth of children who would not survive.

As residents recall, the harsh church policy of prohibiting burial of the unbaptised in consecrated ground effectively left bereaved families with nowhere to grieve.

Decades later and Achill has embraced its cilliní – as have many other communities across the State. Blessing ceremonies have attempted to heal the pain, with one such event held 14 years ago this month, when the graves of “paistí marbh” at Dookinella were cleared of rocks and boulders, and marked with borders and white stones taken from the Slievemore quarry.

Graveyard
Padraig Lavelle, then working with Mayo County Council, was a member of the Achill graveyard committee, and recalls that a cillín was traced then to “just about every village”.

With fellow committee members, he planned a memorial, which was designed by local architect Bob Kingston and built in the graveyard just below Slievemore and close to the island’s deserted village.

“We remember here the little ones in our cilliní and all those laid to rest outside this consecrated ground,” the memorial’s inscription reads in both English and Irish.

Lavelle, who experienced a close family bereavement at the time of its completion, says it serves as a “little oasis for reflection for all”.

The children’s burial grounds have become so important to the island, Lavelle says, that there is a sense of deep loss now about the damage inflicted by winter storms on a cillín near Dugort.

“We think there were unknown sailors buried here also,” islander and farmer Geoffrey Gallagher explains, as we took a trip across the dunes last weekend to the shoreline.

Here, tiny bones are scattered around, and larger sections of skeleton protrude through the remains of a sandy cliff bank which was torn away by the January storm surges.

“A rock armour wall was built in the early 1990s to protect this cillín na leanbh,” Gallagher says.

There is no trace of that wall now, and Gallagher suspects that the sea took some of the burial ground with it in the big Atlantic swell.

“The tide came so high that you can still see the evidence,” he says, pointing to the flotsam and clumps of dried-out seaweed strewn across a good third of a mile or more from the shore. “It was so powerful that it engulfed several fields.”

‘Grey area’
The island residents are concerned that the damaged Dugort cillín will be consigned to that “grey area” which State agencies can tiptoe around.

“Because it is historic by nature, it could be the responsibility of the Department of Arts, Heritage and the Gaeltacht, or the Office of Public Works, which means waiting for archaeologists before we can do anything,” Lavelle says. It may not be a priority for agencies that are stretched to deal with other types of damage.

However, it won’t be forgotten by René Böll in his bid to document the cilliní which are etched on his memory – as is the Achill landscape which his father Heinrich described in his Irish Journal, published in 1957.

The artist, who has exhibited in Europe, Asia and North and South America, has spent five years to date on this project.

“Most are near the coast, with some located in Stone Age constructions such as ringforts,” he explains. “There is a very impressive one in a ringfort on Achillbeg,” he says, referring to the small island off the southern tip of Achill which was evacuated in 1965.

Paintings
He has extended his work to the Corraun peninsula, where has counted some seven cilliní this week. “I have 15 paintings completed already, and I plan to have 30 large works, which I will exhibit in October in Bonn, Germany,” he says.

Böll will be speaking on the subject of “Heinrich Böll and his family’s fight for humanity” at this weekend’s annual memorial to his father on Achill. The Heinrich Böll cottage in Dugort has been a residency for artists and writers since 1992.

The programme includes an exhibition of landscape painting by Alex McKenna and archival photography from the Böll family collection at the Western Light Art Gallery in Keel.