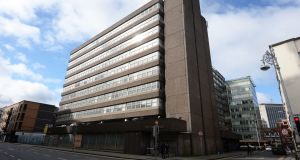 The planned demolition of Apollo House in Dublin has been put on hold.

This follows objectors to the demolition and redevelopment of the 1960s office block lodging appeals with An Bord Pleanála against the decision by Dublin City Council to give the plan the go-ahead.

Over Christmas and the new year, the focus on the homeless crisis centred on Apollo House after it was occupied by housing activists and homeless people in a campaign fronted among others by singer Glen Hansard and movie director Jim Sheridan.

Now the planning board is to decide the future of Apollo House after it confirmed on Tuesday that appeals had been lodged against the city council decision by a management firm representing the nearby 66 Corn Exchange apartments and developers Balark Investments Ltd.

The appeals board has also confirmed that a third party appeal had been received, but had yet to be validated, against the decision to give the go-ahead for the redevelopment of Hawkins House, which is a companion application to the Apollo House plan.

The Office of Public Works (OPW) is the applicant for the redevelopment of Hawkins House – which houses the Department of Health – while the Nama-appointed receiver to Cuprum Properties Ltd – Mazars – is seeking to redevelop Apollo House.

The city council permission granted to the OPW allowed for a combined development of a new office “quarter”, along with shops, restaurants, a public plaza and a diagonal pedestrian street.

In their objection against the redevelopment of Apollo House, the Corn Exchange residents stated that the new building, by way of its massing, scale and design, does not represent a worthy replacement to the existing building.

However, in response to the concerns expressed when the plan was before the city council, consultants for Cuprum reduced the height of the new block by omitting one floor from the 12-storey building and reducing its height by 13ft to 146 ft.

The second appeal against the Apollo House redevelopment is by Balark Investments which recently purchased the nearby College House and Screen Cinema.

In their objection against the plan, Balark states that the three key site locations of their own landbank, Hawkins House and Apollo House, should be redeveloped together.

The objection stated that the piecemeal approach to the redevelopment of the city block has resulted in a number of inefficiencies and challenges.

A decision is due on the appeals in May of this year.