Another Life: How to make an island raven feel as sick as a parrot

Jays in California are being left eggs dosed with an emetic to discourage them from eating those of a threatened seabird. Could it work with their Irish cousins? 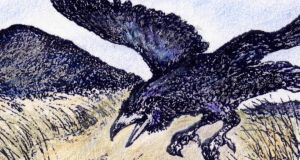 Territorial: a raven’s skirmishes can be claw to claw. Illustration: Michael Viney

Living beneath the flight path of ravens commuting from the mountains to the shore has let me eavesdrop on a good few of the 64 calls supposedly identified by the Romans (a repertoire, as ornithologists agree, certainly more elaborate than those of most other birds, even when sorted in sonagrams).

Flying singly, it’s the measured and sonorous crok-crok that chimes above my head, a routine call of identity that, in the still air of the hillside, carries for at least two kilometres. More engaging, liquid and musical, are the multisyllabic conferences – perhaps just gossip – that go on between pairs in leisurely flight.

I used to do the crok-crok rather well, for the mischief of seeing a solitary commuter swerve from its line to investigate me, but nevermore, like Poe’s raven, as I gain some tact with age.

The more urgent end of the bird’s vocal range, a shrill, even screeching raark-raark-raark! accompanies periodic aerial battles with a stooping peregrine in which the raven rolls on its back and extends its claws towards the falcon – a long-running, inconclusive feud that I have watched in awe.

Territorial skirmishes can be even more claw to claw. Once I aimed a video camera at a dramatic struggle high in the sky, and panned down smoothly with the ravens as they thumped to earth together, talons locked – then found I had forgotten to press record.

Such trenchant memories divert me from my theme: the appetites of ravens as predators and whether, in some habitats, there is a pressing need to try to change their gustatory ways.

There’s no doubt that ravens still command a human respect and admiration (all those clever tricks using stones and string as tools) not accorded to the lesser corvids, such as the beady-eyed hooded crow or magpie. Delighted reports to Eye on Nature have had ravens flying over Fingal or even St Stephen’s Green, far from their traditional rural fastnesses, and increasing numbers are nesting in lowland trees.

It’s as the vulture of these islands, cleaning up the dead, that the raven’s role has been most distinctive and enduring.

My nearest pair nest on a low cliff in the rocky rise of the land at the end of the dunes: an eyrie successive generations have used every year since David Cabot first noted them, in 1963. It gives them an excellent view of the flat machair commonage and its grazing sheep. Here, from time to time, I have watched them excavate the remains of a fallen ewe, scattering the wool in the wind, and vanishing finally beneath the spiky portcullis of the ribs.

The sea cliffs of the western islands have probably always attracted nesting ravens, offering as they do the eggs and young of seabirds and wild duck, and the dead crabs, fish, birds and odd seal or dolphin stranded at the drift line. But the accessible islands all have a flock of sheep and, in harsh winters on those long emptied of people, a scatter of dead ewes.

Inishbofin, on my horizon, has both sheep and several pairs of ravens, with a recent small increase in the latter. The concern of Anthony McGeehan, a Belfast ornithologist and writer who gives regular bird tours to the island’s many visitors, is for its ground-nesting birds, among them lapwings and corncrakes red-listed for protection, and a few of Ireland’s last surviving cliff-dwelling rock doves.

Monitoring the birds over nine breeding seasons, he has seen lapwings desert the west end of the island when ravens wiped out their eggs or chicks for three springs in a row, undeterred by the parents’ anguished mobbing. They gather to nest since then in a central pocket of grassland, where they have kept trying to rear young, sometimes laying two replacement clutches of eggs. Last August they succeeded in mustering a total population of 31 birds.

This spring, writes McGeehan on his Facebook blog, enough pairs began to nest, but by late April “some clutches had already been eaten by ravens and I expect that the whole lot will go”. He urges the National Parks and Wildlife Service to try “conditioned aversion” to put the ravens off this particular food.

In this technique corvid predators are offered dummy nests, installed ahead of the real ones, with poultry eggs painted to resemble those of the vulnerable species and dosed with carbamylcholine chloride, an emetic. This is under trial in California to discourage the native jays from eating the eggs of a threatened seabird, the chubby marbled murrelet.

If the NPWS cares to try it an Inishbofin raven may also be made to feel as sick as a parrot.