Analysis: Smaller flats on the way as new planning rules come into effect

Changes are aimed at bringing down apartment construction costs 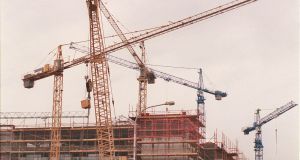 The cranes may be back on the Dublin skyline, but will it mean more residential units for sale? Photograph: Alan Betson

Last June, Minister for the Environment Alan Kelly sent what now seems like a subtle warning to Dublin City Council, telling it not to put any “unreasonable or excessive” requirements in the city development plan which could damage the commercial viability of housing.

The following month, the council published its proposals for changes to the apartment standards for the development plan due to come into force at the end of this year, introducing a new category of studio, reducing the numbers of dual-aspect apartments, but retaining the overall size of apartments.

The council hadn’t quite got the message so the Minister and his department decided to spell it out for them in the form of the “Planning Guidelines on Design Standards for New Apartments”, which, for the avoidance of doubt, were mandatory and reduced the minimum size of apartments which could be built in Dublin city by 10-20 per cent.

The reasoning behind both the warning letter and the guidelines was to bring down the cost of apartment construction, caused, according to Kelly, by the “upward spiral of new planning requirements being specified by some, but not all, local authorities”.

But is it the size of apartments that’s making them too expensive to build?

The department does not break down this cost, which takes in the full gamut of differences between the council’s standards and the department’s standards, including “dual-aspect” requirements and “lift-core ratios”.

Property Industry Ireland (PII), a division of Ibec, gives a more explicit breakdown of where costs lie. An analysis by its architecture, project management and cost management consultants put the council’s requirement for 85 per cent dual-aspect apartments as costing €16,000 regardless of apartment size.

For its part the builders’ representatives group, the Construction Industry Federation, sets even higher costs on the gap between the council and the department’s standards. It puts an additional cost of €34,000 on a one-bed, €42,000 for a two-bed and a staggering €46,000 on a three-bed. The CIF completes the picture by estimating the total construction costs for a one-bedroom apartment within the council’s additional regulations at €182,000 for a one-bed, €280,000 for a two-bed and €317,000 for a three-bed. It stresses these are baseline costs and do not include site, development contributions, VAT or professional fees.

Where the CIF does concur with the PII is on what the single highest cost is – the council’s dual-aspect requirement adding €16,000 per apartment regardless of size.

What no one has factored into their assessments is that this is the area where the council had proposed significant change. In the draft development plan, it had proposed reducing the requirement for dual-aspect apartments to 50 per cent, which would put it directly on a par with the department’s new guidelines.

This change would, the council said, allow the construction of six apartments per lift on each floor. In its analysis, the department said six was about the practical limit, due to separate requirements on distances from apartments to fire escapes.

The CIF is unwilling to be definitive on this, saying it was impossible to give specific numbers of what could be built, saying only the lower the costs of construction, the quicker will be the recovery in levels of production. But it emphasises other factors which have a bearing on viability, most notably the availability of finance for both builders and buyers.

But if the CIF is shy about saying whether there is money to be made in the construction of apartments, the department is not. Its analysis says that under its new guidelines, a developer building a block of 10 apartments at a cost of €2.2 million could make a puny profit of €15,400 – a return of slightly less than 0.7 per cent.

1 Coronavirus: Surge of cases hits nursing homes as clusters jump to 38
2 Ireland has strategy to ‘break the chains’ of coronavirus - WHO’s Mike Ryan
3 We need to cancel the Leaving Cert and give students predicted grades
4 Coronavirus: Situation in Ireland being ‘misrepresented’ because of limited testing
5 Coronavirus: Residents of Wuhan told to stay inside and be vigilant
Real news has value SUBSCRIBE