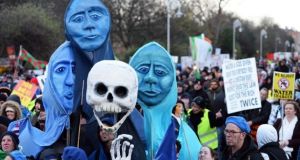 People in Dublin protesting at water charges ealier this year. Alan Kelly said the derogation from Europe around water charges had ended and the State either had to maintain a charging system or face fines from the European Commission. Photograph: The Irish Times

Former minister for the environment Alan Kelly says Ireland has no choice or flexibility when it comes to imposing a payment mechanism for water.

He said the derogation from Europe around water charges had ended and the State either had to maintain a charging system or face fines from the European Commission.

“It has always been my opinion that the decision made by this Fine Gael government, being remote controlled by Fianna Fáil, was illegal.”

“They can tweak it as to the type of charges, but the concept of derogation is gone since 2010 when the River Basin management plan was put in place. The equation now is we will have to either have water charges or pay large fines.”

He added: “In 2010 the then Fianna Fáil/Green government told the European Commission that charges would be introduced. So it’s not the last two years, it’s the last six years. The Commission is watching this very closely. They are going to come after Ireland.

“A government can tweak the charges but ultimately there will be charges to ensure that there is cost recovery, that the user pays and the polluter principle is in place.

He said that comparisons with Scotland were not valid as there are charges for water across the board in Britain and that while the mechanism in Scotland is slightly different. “Scotland is not comparable to Ireland as it is a region. We are a country.

“Ireland is a bigger fish, we’ve been at this for six years and we haven’t achieved what we set out to achieve,” he told RTÉ’s Morning Ireland.

“The ultimate situation in Ireland is that if we chose to suspend or get rid of charges the Euro Commission will request information it will take ten weeks further on from that, they will start infringement proceedings and there will be massive fines.”

Discussing the suspension of water charges while the charging model is reviewed, Mr Kelly told Newstalk Breakfast: “Fine Gael have been completely discredited on this. They’re trying to have their cake and eat it. They’re trying to play to an audience of their voters which actually believes in this ...But then they’re also trying to ensure that the position they find themselves in the Dáil can be maintained.

“Anyone who is selling utopian, populist rhetoric that basically legally you can do whatever you want to do... [They] are going to find out pretty quickly pretty the European Commission are going to come down very hard on us”.

Scale of these fines

Mr Kelly said the scale of these fines would be in the millions.

In a statement the commission said the flexibility that had been offered to Ireland not to impose charges was no longer available because Ireland had decided to levy them.

The commission is understood to be “extremely frustrated” at the State’s failure to lodge a major plan to govern Ireland’s water resources , which was due in December 2015.

The commission has directly linked the delay in filing the River Basin Management Plan to the ongoing political debate over the future of Irish Water and the imposition of water charges.

The commission will now request information from the Government before moving on to enforcement proceedings, unless it gets clarity from Ireland that water supplies will come with a charge.

Daily fines could be enforced that could lead to a multimillion-euro bill. Ireland was fined €12,000 every day for failing to comply with a waste water directive.

The move comes after the commission insisted Ireland cannot abolish water charges without breaking the water framework directive, which Ireland has already signed.

The correspondence from the commission to Ms Boylan states EU member states cannot breach the directive, adding that Ireland must abide by “polluter pays” and have rules that recover the costs of supplying water.

However, Ms Boylan said the commission had been “embarrassed into publishing a vague response”. The Government could abolish water charges if there was political will.

Ms Boylan said: “Ireland still has the possibility to use the derogation from water pricing as many other regions and countries have done across the European Union. It is clear that cost recovery does not require water pricing, as is the case in Scotland.”