Abbey Theatre launches petition to have Liffey bridge named after it 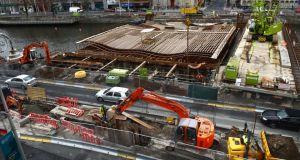 The new bridge linking Burgh Quay and Marlborough Street under construction over the river Liffey in Dublin. Photograph: Cyril Byrne 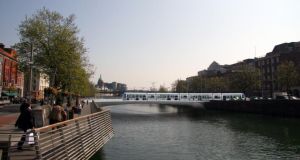 A photomontage by engineers Roughan O'Donovan of the new Liffey bridge, seen from O’Connell Bridge, with a Luas tram passing over - overhead power lines and supports are not shown.

Dublin’s Abbey Theatre has launched an online “urgent petition” seeking to have the new bridge on the River Liffey, currently under construction between Marlborough Street and Hawkins Street, named after itself.

With Dublin City Council’s Commemorative Committee due to make a recommendation next month on what the bridge should be called, the national theatre is aiming to get 3,000 signatures of support.

“This is a once in a lifetime chance to celebrate the home of all of Ireland’s greatest playwrights and to commemorate our founders WB Yeats and Lady Gregory as we approach our 110th anniversary.”

Noting that the new Abbey would face onto the Liffey just opposite the new bridge, it says naming it after the theatre would “put culture and Irish theatre on the map for the people of Ireland and tourists alike”.

Cllr Dermot Lacey, leader of the council’s Labour group, said there was a “strong campaign” for it to be named after a woman but also a “general principle” that the person should be dead at least 20 years.

He said suggestions needed to be made before next Friday. “However, I have no doubt that, no matter what we call it, some Dubliner will give it a new name the following day and that is the one that will stick.”

Cllr Paddy McCartan (FG) first proposed that the bridge should be called simply the Abbey Bridge, given its close proximity to the theatre.

The Abbey’s appeal for support is on thepetitionsite.com