Why are some ‘free’ schools charging admission fees in breach of law?

Despite having the law on their side, parents are struggling to have their rights upheld 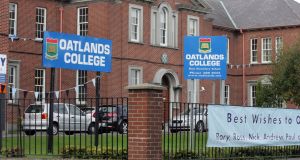 Oatlands College in Stillorgan: the policy available on the school website at the time of writing in early September still had references to non-refundable payments. Photograph: Cyril Byrne

Two years ago legislation was enacted to end the practice of schools charging admission fees for enrolment.

The law is clear: “A board shall not charge fees, or seek payments or contributions (howsoever described) as a condition of an application for admission of a student to a school or the admission or continued enrolment of a student in the school,” according to the 2018 Admissions Act.

An investigation by The Irish Times, however, has found that a number of schools have been breaching this law and that parents who are charged admission fees by individual schools often struggle to have their rights upheld. In some cases, parents are still facing bills of hundreds of euro in non-refundable fees for enrolment – even though the law expressly prohibits this. Fee-paying schools are exempt from the regulation.

The schools are within five kilometres of each other. Separately, they had already been declined a place in another school for their son but are on a waiting list.

On February 20th, 2020, Clonkeen College wrote to parents, including Clíona and Barry, offering their sons a place in the school.

In this letter, parents were advised: “In keeping with the school’s current admissions policy, a payment of €400 must accompany this acceptance form … The purpose of this payment is to discourage the practice of some parents initially accepting the offer of a place for their son in Clonkeen College but then later sending their son elsewhere. Unfortunately, in the past, this unfair practice prohibited Clonkeen College from extending second-round offers to deserving students on our waiting list.”

Following a series of requests for comment from Clonkeen, none of which the school replied to, it wrote to parents acknowledging that the fee was not in compliance with the 2018 Education Act and offered to refund them.

According to Oatlands College’s admissions policy for first years due to begin in September 2021, a “non-refundable” application fee of €50 is requested with each application form.

In addition, the school says, “a non-refundable amenity charge of €200 must be paid when you accept a place in the college. This is the administration charge for your son’s first year in college. Items covered by this charge include photocopying, personal insurance, journal, house exams etc. In cases of financial hardship please contact the principal.”

While schools are allowed to request voluntary contributions and administration charges, they are prohibited by law from making this a condition of admission to the school. Fee-paying schools, however, are legally allowed to charge application fees.

“It’s always really difficult for parents in southeast Dublin to get a school place,” says Clíona.

“In our case, we have put our children’s names down for fee-paying schools but we are dreading the possibility that they’re the only offers we get: there is just no way we could afford the fees, whether or not we made multiple sacrifices. We applied to a few places only because no parent around here could gamble on just one school. We’re down €450 on application fees to non-fee paying schools and another €95 for a fee-paying school – before he’s even had a day in the classroom. We just don’t have that kind of money.”

When contacted, Oatlands said it had since updated its admissions policy, which it said was based on a template from the Department of Education’s website.

However, the policy available on the school website at the time of writing in early September still had references to these non-refundable payments.

Overall, records released under the Freedom of Information Act show that the Department of Education received at least 30 complaints from parents about schools which they said were illegally charging admission fees between October 2019 and July 2020.

Schools are exempt from Freedom of Information legislation, so their names were redacted by the Department of Education

The department’s school governance section received a particularly high volume of complaints from parents in late November 2019, which a department official attributed to media coverage over an illegal admission charge.

In the correspondence, parents who contacted the department’s school governance section were told that they should contact the school’s board of management and point out that school admission fees were illegal.

“It is a nonsense suggestion that parents contact the school’s board of management in the first instance,” says Tara, a parent who spoke under condition of anonymity.

“The boards of management are the very people who are illegally charging this money in the first place, and the Department of Education is telling us to pick a fight with our child’s school before they’ve even enrolled in it.

“I went to the board, as advised, and told them I was out of work and didn’t have the money. The board backed the school and told me I could pay in instalments. A friend of mine, the sole breadwinner, had to do the ‘walk of shame’ several times to try and get her money back.

“They made her dance through hoops. It’s really hard for parents whose first child is going to school – their second child is more likely to get a place if they already have a sibling enrolled in the school.”

However, Tara says she accepts schools have a difficulty here.

“Some people in south Dublin are taking up places waiting on fee-paying schools, so the non-fee schools think €400 isn’t a lot for those parents who can afford six years of fee-paying school, and I can see how this might tie their hands.”

The Joint Managerial Body and the Irish Primary Principals’ Network both said schools should adhere to the regulations.

“We know that schools had their funding cut by 2010, it was only partially restored in 2019 and, even with Covid-19, school funding remains inadequate,” says Páiric Clerkin, chief executive of the latter body.

“But we are clear on our advice: under no circumstances should schools [charge admission fees]. Schools can ask for a voluntary contribution but should never link it to admissions.”

* Names of parents have been changed at their request

Last November a school told a parent that “to accept a place, you do have to pay an acceptance payment of €250 … Only the payment that we used to get with the application form to register a student is now abolished.”

The parent sought advice from the department, stating that “I’ve exhausted taking this further with the school as their position is: ‘We are charging.’ ”

The department informed the parent in question. “It seems the schools are now moving the goalposts,” the parent said. “I have emails and receipts relating to this acceptance fee and at no point was the money considered voluntary. I thank you for dealing with this matter, but I feel your department is not doing enough to enforce the legislation.”

Separately, on February 11th, the department wrote to the chair of a board of management to inform them that parents had complained about being charged an admission fee.

“[Parents] were advised by the department that schools cannot charge such a fee but they claim that when they returned to the school with this information, the school refused to provide them with a refund,” the department said.

However, there is no written record of a school directly addressing these particular allegations. The department redacted the names of all the schools involved.