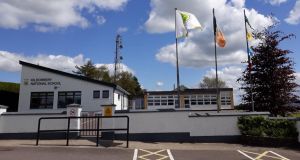 Kildorrery National School: ‘Everyone’s anxious to get back at this stage’

School principals around Ireland are scrambling to get classrooms ready for the new term, but for Rachel Kelly, in the north Cork village of Kildorrery, the task has been compounded by delays in building works that have forced the school out of its grounds for more than a year.

The primary school had to relocate last August when one of the workers replacing the roof of the building fell and was critically injured. Brian McGrath, a 39-year-old father of three from Mitchelstown, died a week later in hospital. The Health and Safety Authority (HSA) closed the site to investigate the incident and because asbestos in the lining of the roof had been disturbed. Staff had just two weeks to get their new home, 20km away at Mallow GAA complex, ready for about 200 pupils.

“We set up the school in Mallow from nothing, it was just an empty building,” says Kelly. “We weren’t allowed to access the [Kildorrery] building, so we had to set up . . . without getting anything, not even a biro or a folder. So many people pulled together, the staff and parents were wonderful to help us get up and running.”

It takes 20-25 minutes to bus pupils and staff back and forth from Kildorrery, with the lost time forcing the school to cut back on extracurricular activities. Covid-19 guidelines have added further challenges given the need to minimise interaction between classes. The Department of Education is not providing additional buses to allow for social distancing. However, after repeated requests, the department has agreed to lay on two extra buses so children can be collected en route and to enable the school to resume its normal tuition time.

Kelly believes the biggest challenge Covid-19 will present for the school will be the availability of substitute teachers. The department has promised an additional €41 million to help primary schools with cover for the likely rise in sick leave, with 250 posts being allocated to new supply panels. Kelly says at times it can be “impossible” to get substitutes for their 11 teachers.

“Teachers will work through anything. A normal little illness that they’d have before, they’d work through, but now if they’ve any sort of respiratory symptom they’ll have to stay at home so we’ll have a huge demand on subs, [but] I don’t know if they’re going to be available. We hope they’ll be available.”

Kildorrery is one of several hundred schools undergoing works before reopening. Department figures show seven schools had “large-scale projects” completed up to July 31st this year, with more than 340 in progress.

Inside Politics · The public is incensed; the Government is in danger
Coronavirus Data Dashboard

A spokeswoman for the department said 405 projects were approved under the summer works scheme this year at a projected cost of €30 million, of which more than 50 per cent “are either completed on site, in construction activity or have been given approval to commence work on site”.

There have been 253 applications approved for the emergency works scheme and they are “at various stages of completion”.

Kelly says “parents are disappointed, they’re angry, they’re frustrated, as are the staff and the board of management” with the ongoing uncertainty over the works in Kildorrery. “The Minister is bogged down with letters from us.”

“We were told initially that we’d be out of Kildorrery for 12 weeks. That was last August.”

One of the major reasons for the delay was the school roof being left open when the site was closed off, and there was a “huge amount of water damage done over the winter”.

Work on the roof did not restart until December but was largely complete when, in March, Covid-19 restrictions led to all construction stopping until mid-May. The roof was finished shortly after work recommenced, but only then was the extent of the damage fully assessed.

Contractors had to be brought in to remove any remaining asbestos, and a separate tender process for what is now a full refurbishment began.

Local Labour TD Seán Sherlock says he would like to see temporary accommodation on Kildorrery grounds being considered. “That would have alleviated a lot of the stress for parents and for children.”

The department refused that request last August and again in the summer, saying it did “not represent value for money”.

A department spokesman said it “fully appreciates that the additional delays . . . are extremely disappointing and frustrating for the entire school community. However, we can assure the local community that the school is doing everything it can to ensure the earliest possible return to the school.”

Staff and children will be returning to Mallow in September but they don’t know for how long. Management has been given a 12-16 week estimate for the school refurbishment once the work begins, but that has yet to happen.

“Everyone’s anxious to get back at this stage,” says Kelly. “They’ve told us we’ll have a state-of-the-art school when we go back. We’ll just have ride out the storm and hopefully we’ve only one more hurdle in front of us.”