Trinity slips in university rankings but UCD and UCC up 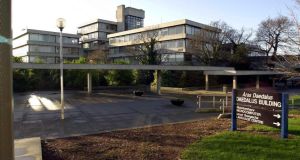 The rankings from Times Higher Education, the longest established international university ranking company based in the UK, indicate Trinity retains its place as Ireland’s highest ranked universtiy at 129th internationally, but UCD rose 26 places in the latest rankings just published to 161 in the world to narrow the gap between Ireland’s two top 200-ranked institutions.

Dublin City University and University of Limerick did not achieve a place above 400, according to the latest rankings. “Both institutions applied and submitted the requested data but both fell short of the top 400,” a spokeswoman for the Times Higher Education rankings said.

Trinity’s’s decline “should be a cause for alarm”, said ranking editor Phil Baty. “When the flagship falls it can affect the standing of the rest of the country,” he said.

Trinity responded saying that the lower ranking it received represented a “wake-up call” for Irish higher education. It was “critical” that investment in higher education be increased because of its contribution to job creation and innovation, said Prof Vinny Cahill, Trinity’s dean of research.

The university was amongst a number of leading institutions in the UK, Netherlands, Germany, France, Belgium and Austria to see a decline.

“They have all taken a fall. You can quite clearly attribute that to chickens home to roost, austerity is starting to hurt the universities. They can’t be expected to weather the storm without experiencing decline,” Mr Baty told The Irish Times. “Those cutting education are seeing rankings fall.”

UCD and UCC managed to buck the trend, he added. “What we have seen here is UCD has improved and UCC has improved. Within the climate of fiscal constraints some universities have managed to hold their ground.”

The figures from the latest rankings showed Ireland overall had performed quite strongly with two institutions in the top 200, said a spokesman at the Irish Universities Association. Ireland was ranked seventh in the world if its top 200 placement was assessed on a per capita basis, he said.

UCD had performed well but with the fall in Exchequer support the State was becoming a minority funder of the sector, said the university’s president Dr Hugh Brady.

UCC had improved its position despite “very difficult austerity challenges”, said its president Dr Michael Murphy. Both Galway and Maynooth welcomed their performances “despite significant cuts in overall funding”.