The Secret Teacher: Our belief that Leaving Cert is exemplary is at dizzying heights 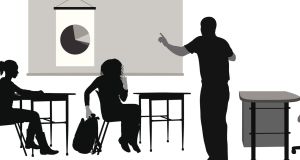 ‘Lessons learned last year should lift us and propel us forward to a much-improved alternative this year.’ Photograph: iStock

The year 2021 will be different. That is what we kept telling ourselves, and it helped get us through 2020. As I type this, 2021 has indeed been different so far but only because it is worse. This applies both to education and beyond. Were we not specific enough about what we meant by different?

February 29th, 2020, brought Ireland’s first Covid case and an expanse of new and unforeseen territory – for the highest levels of government and the average Irish citizen alike. As we were told many times, “we are all in this together”, and we did come together to do our best to find our way. Mistakes were undeniably made and many were forgiven, some more easily than others. While there was a lot of anger at the way things evolved, there was also a lot of empathy, as nobody in any role they had been appointed to had had any inkling that Covid would feature in their brief.

But the three-party coalition was formed at the end of June 2020, months after Covid hit Irish shores. Everybody with a role in it consciously signed up for a brief that did include taking over the task of navigating our nation through this pandemic. So the agenda this spring does not come as a surprise, and those at the key decision-making tables must strive for clarity.

We are where we are and nowhere else on any given day in this Covid chapter of our history books.

What is real on that day is the basis on which decisions must be taken. Should situations evolve and change, other options will perhaps emerge. Contingency plans, for better and worse scenarios, will undoubtedly have been considered and filed away. These should only get aired if and when necessary. In the real world at any one time there can only be a Plan A. To focus on alternatives only compromises and undermines that plan. The government’s conviction that the plan they have committed to is the best possible one in the circumstances is what keeps people hopeful and on side.

Media speculation and leaks around alternatives only hurt Plan A. Both are entirely unhelpful to those steering the ship. Individuals and households are placed under unnecessary strain as a result of mixed messages. Casting doubts about a plan because it isn’t what you fought for at the negotiating table is petty. When did Ireland last need a united government as badly as we need it now?

Everyone at the table needs to bring the utmost integrity to it and vow to bring a halt to the leaks as a code of honour. This would solve so much of what is currently proving a strain on individuals.

Plan A must always be reasonable, and what it asks of us must be meaningful. These are prerequisites to us signing up to it. At the darkest times over the past year millions of us actively complied with previously unimaginable degrees of restriction. Core to the largely high levels of compliance was that we understood why.

Yet, on the day of the highest daily case figures came an announcement that Leaving Certificate students would attend school – while schools were closed. Clearly our conviction that the Leaving Cert is exemplary has reached such dizzying heights that we place a higher value on completing it than on life itself. I had a nightmare last night that the decision to push ahead with it was based on how smoothly the Leaving Cert went in November, and that this success is critical to the strength of commitment now. Surely that can’t be right?

Last year’s fudging and fumbling may well be explained away by how unexpected it all was. Statistics for positive cases and hospitalisations right now dictate what a viable approach to the traditional Leaving Cert must look like. There is no room at the decision-making table for anyone with blinkers on. Covid has pushed us forcibly into an overhaul of the school-leaving assessment process.

Schools cannot be open and closed at the same time. It took just over 24 hours for the penny to drop on that one

Lessons learned last year should lift us and propel us forward to a much-improved alternative this year. And we must plan for that in detail, as “the Leaving Cert will go ahead” cannot under any circumstances be Plan A. It takes more than six words; the small print must make provision for 2m distancing, obligatory masks and appropriately small numbers in rooms with adequate supervision and ventilation. Right now, based on the current facts, that is what Plan A necessitates, along with corresponding provision for projects, practical components and oral exams.

A hybrid plan is no plan. That is why I have chosen not to explore alternatives here. Based on what is real today there seems only one viable option in terms of promising a version of the real Leaving Cert as we know it.

Similarly, a hybrid plan is no plan when it comes to school closure. Schools cannot be open and closed at the same time. It took just over 24 hours for the penny to drop on that one. In the same way 60,000 students were due to sit the Leaving Cert last summer, and of them a number just shy of 3,000 actually sat them in November, with the others settling for calculated grades. This cannot be called a successful, glitch-free Leaving Cert. A hybrid Leaving Cert is no Leaving Cert. How long will this penny take?

We can only re-visit our mantra that 2021 will be different, and this time be crystal clear about what exactly it is we mean by that. Perhaps if we ask a clear question, we will get a clear answer.