The mini-revival of the Irish language

We are forever hearing about the imminent death of the Irish language, but there is a growing interest in the language worldwide, especially at third-level 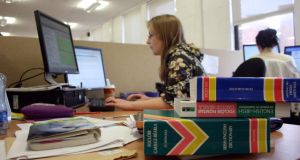 There seems to be a general perception that our national language is perpetually on its last legs. But the view from within the Irish-language departments of our third-level institutions – and from colleges as far afield as the US and Australia – is rather different.

According to the Higher Education Authority, the number of students studying through Irish at third level – and studying all manner of subjects from economics and journalism to computing – is not only very healthy, but has been described as a “mini-revival”.

Why is this? Some point to the steady rise of Irish-language preschool and primary education since the 1970s, which may now be contributing to an increased demand for Irish-language courses at third level; others suggest that innovative programmes such as Dublin City University’s Fiontar have revolutionised the way in which students relate to the language.

“Fiontar is an interdisciplinary school established in 1993 to link the Irish language with contemporary finance, computing and enterprise, all taught through the medium of Irish,” says Emer Ní Bhrádaigh, a lecturer at DCU whose research specialism is entrepreneurship in Gaeltacht areas.

“Over the past 22 years we have evolved, so now we also teach journalism and the language itself. But not, as other schools might do, through literature, poetry and the history of the language. We would be looking at applied Irish.”

Fiontar has been instrumental in the development of online databases such as logainm.ie, which gives a detailed explanation of every placename in the country and maps locations, and tearma.ie, a dictionary of contemporary terminology. If you need to know the Irish for “profit maximisation”, tearma.ie is your man (it’s “uasmhéadú brabúis”).

The idea is not just to maximise the relevance of Irish for a tech-savvy world but to allow those studying at DCU to use their language skills in that world.

“Putting up those systems required people who could put together and extract information from websites and databases – project managers, people who could consult the national terminology committee for the language and so on – skills other than simply a deep knowledge of the language,” says Ní Bhrádaigh.

On the international front, the Fulbright Commission Ireland sponsors student and teacher exchange programmes between the US and Ireland. In 2006 it was sending four Irish-language teachers to the US every year. Now it sends 10 and has links to 50 or so third-level American institutions and 90 community organisations involved with teaching and promoting the language.

“We found that there are three main reasons why people want to learn Irish,” says Colleen Dube, the commission’s executive director. “One would be for heritage and cultural reasons. That would be about a third. Then you have a group which I call the linguistic nerds: people who are really interested in languages. So they have a Romance language and then decide they need a Celtic language as well.

“And then what has been happening over the past five or six years, and is really interesting, is early-career scholars. These are PhD candidates who are looking to read early modern historical sources or Irish-language poetry not in translation. People working in the fields of anthropology or ethnography. That’s still emerging.”

One Fulbright student is currently undertaking an MA in nua-Ghaeilge (modern Irish) at UCD, with a research focus on contemporary women’s poetry.

When Liam Mac Mathúna, emeritus professor of Irish at UCD and editor of Irish studies magazine Éigse, started as a lecturer in Irish in the late 1960s, student numbers were also healthy. But the language landscape was very different. Some university courses made a distinction between honours and pass classes; postgraduate research through Irish was practically non-existent. Now, he points to the development of postgraduate research and the international dimension as characteristic of the current scene.

“One of the things feeding into the interest in Irish at the moment is the interest in the US and in Australia,” he says. “That’s not new, but the level of organisation is new. In the past, offerings of Irish at third level abroad depended on one or two individuals. Now there’s more co-ordination at a practical level, through such groups as the American Conference of Irish Studies.”

Mac Mathúna says there have been good news stories at home as well. Irish has been given a boost by the success of TG4, the Official Languages Act, 2003 and, since 2007, the official working status of Irish in the EU. One obvious benefit is on the jobs front.

“When I was starting out there would have been an expectation of going into teaching or the civil service,” Mac Mathúna says. “There are a lot more choices now, abroad as well as at home. There are jobs in Brussels, for example, and academic jobs on the continent and in the States are certainly there as well.”

However, not everything is rosy. Many students sign up for Irish in first year because it’s not only a required subject for Leaving Cert but also for entry to the NUI colleges. “There is a fall-off in second year,” Mac Mathúna says. “The challenge is to keep students there once they come in.”

He challenges the perception that to study Irish at third level, you need to have been fluent since childhood.

“I checked out some third-level classes in recent years which were exceptionally good,” he says. “And I found that most of the students had not been to Gaelscoileanna. Two-thirds had been to other primary schools.”

It’s the old story: if you have a top-notch Irish teacher at primary and secondary level, the sky’s the limit. “The difficulty is that not everybody has a good, motivating Irish-language teacher. And so, when you move outside the Gaelscoileanna, it’s a bit hit and miss. The immersion in the Gaelscoil is of such a nature that it raises almost all boats, whereas the other system doesn’t. A phenomenon, which started in the North with the University of Ulster, is that we’d have ab initio [from the beginning] students of Irish at third level. In UCD, with which I’m most familiar, it’s possible to go from no acquaintance with Irish to PhD over time.”

But that requires resources to be put into the actual teaching of the language. Many students come to Irish for the first time through Irish studies courses, which are often seen as a soft option in the linguistic sense. But these courses have been central to the rising interest in Irish abroad as well as recognising the reality of the relationship been Irish and English at home.

“This is a bilingual culture and has been bilingual for several centuries,” says Louis de Paor, head of Irish studies at NUI Galway. “To study Irish culture in one language gives an incomplete sense of the achievements of writers, film-makers, performers and others involved in cultural production in Irish and in English. At NUI Galway, therefore, we insist on a bilingual approach to Irish literature, history and culture.”

For de Paor, the current state of the language – at third level, as everywhere else – is inseparable from the wider cultural situation. “We may have moved beyond the phase where there was a stand-off between people who considered it absolutely indispensable to a full sense of Irishness that you should have fluent Irish and people who railed against that, who felt that the very existence of the Irish language was somehow an affront to their Anglophone Irish identity.”

He also points to the positive contribution of the Gaelscoileanna and TG4.

“There’s a generation emerging now who have a much less troubled ideological relationship with the Irish language than people of my generation might have had. But identity in Ireland in the 21st century is as contested as it ever was. We have lost economic sovereignty now; before it was a matter of political sovereignty. As in the early 20th century, culture has a central role to play in articulating and complicating and – hopefully – resolving that loss.”

In the 21st century, another major player has been social media. There is a lot of blogging and tweeting through Irish. Oisín Ó Doinn, who is working on a PhD on the use of technology in the teaching of Irish at DCU, is in the thick of it all. He helped to develop the Irish strand of the global phenomenon that is the Duolingo app.

“We seem to have this thing in our psyche – and it’s reinforced all the time by offhand comments and by the media – that Irish is a dying or a dead language. Well, it’s not a dead language; it’s a growing language. We only launched the Duolingo Irish course six months ago and there are half a million people worldwide learning.

“I think the reason why people are so interested is they’re realising there’s a difference between the curriculum that’s in the schools and what the language actually is. I’m always surprised at people going, ‘Why would anyone want to learn Irish?’ My question would be, ‘Why would they not?’”

Mac Mathúna agrees. “If students are led to areas of Irish which are of interest to them, they find it energising and invigorating,” he says. “It should be possible to do new things and to allow people to express themselves in new ways. Certainly the more people Irish has that are open to change, the better.”

MY IRISH: LIFE AS GAEILGE