That's Maths: The rebel who brought Technicolour to Euclid

Oliver Byrne, a civil engineer, brought a dash of colour to geometry 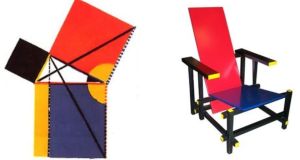 Byrne’s diagram for Euclid’s proof of the Theorem of Pythagoras, together with Rietveld’s Red and Blue Chair, made in 1918

Oliver Byrne (1810-1890) was a civil engineer and a prolific writer on science. He published more than 20 books on maths and several more on mechanics. The one remembered today is his remarkable edition of Euclid’s Elements , published in 1847, with the title The First Six Books of the Elements of Euclid in which Coloured Diagrams and Symbols Are Used Instead of Letters for the Greater Ease of Learners .

Byrne’s innovative idea was to make the task of learning geometry easier by using diagrams in bright primary colours for illustration and for the demonstration of proofs. Equal angles, lines or areas were given the same colour. Byrne claimed that, with this colour method, the Elements could be mastered “in less than one third of the time usually employed”, as demonstrated by various experiments. His expressed aim, “to teach people how to think, and not what to think”, may have a familiar chime for advocates of the new Project Maths.

In the 19th century, geometry had a central role in pedagogy and was regarded as an essential component of a balanced programme of education. Byrne was motivated by didactic concerns, and he aimed “to facilitate the acquirement” of the understanding and use of geometry, which he described as “the best gymnastic of the mind”.

He wrote that his colour method “may be reckoned the only improvement which plain geometry has received since the days of Euclid”.


‘Eccentric’
Byrne was not in the vanguard of mathematical thought. He regarded Euclidean geometry as “the basis of mathematical science all over the civilised globe”, a view outmoded even in 1847. According to Augustus de Morgan, a leading mathematician of the day, Byrne was “a minor, rather eccentric” mathematician.

The book was regarded as something of a curiosity, and was largely ignored by most of Byrne’s contemporaries. It did not sell well: the price was 25 shillings, four or five times the typical book price at the time, and 75 per cent of the stocks were still on hand in 1853 when the publisher, William Pickering, went into bankruptcy.

Like his relative Billy Byrne of Wicklow, who had been executed in 1799 following the rebellion, Oliver was a committed Irish nationalist. In 1853 he wrote Freedom to Ireland , advocating rebellion against British rule, and he toured the United States promoting the cause. This book was dedicated to the memory of Billy Byrne, who “by the dexterous use of the pike destroyed 2,000 of his country’s enemy”.

A facsimile version of Byrne’s Euclid was published recently by art publisher Taschen. It is beautifully printed in four colours.

Rietveld’s chair
Many of the diagrams are reminiscent of the work of Piet Mondrian, Gerrit Rietveld and other artists of the Dutch artistic movement De Stijl. The illustration shows Byrne’s diagram for Euclid’s proof of the Theorem of Pythagoras, together with Rietveld’s Red and Blue Chair, made in 1918. The similarity is striking.

With some justification, Byrne’s book has been described as “the most attractive edition of Euclid that the world has ever seen”.


Peter Lynch is professor of meteorology at University College Dublin. He blogs at thatsmaths.com. His book Rambling Round Ireland is now available as an ebook on amazon.com