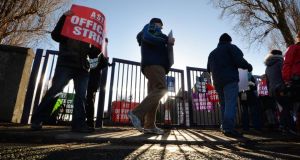 Members of the TUI and the ASTI picketing Rosmini Community College on Grace Park Road during the teachers strike. Photograph: Cyril Byrne / The Irish Times

“The lesson from yesterday for us is that we have had our fingers on the pulse and yesterday confirms that,” said Gerry Quinn, president of the Teachers Union of Ireland (TUI), following Tuesday’s closures of 730 post-primary schools, affecting over 330,000 pupils.

“I think there is huge resolve. I think that potentially this could be a very protracted dispute. It could go on for a long time,” he said.

The TUI and Association of Secondary Teachers Ireland (ASTI) will meet next week to decide on a date for another day’s action in January.

Both sides in the dispute are at an impasse over whether the future of Junior Certificate exams should be corrected externally or by the schools themselves.

The unions say they are willing to talk with Minister for Education Jan O’Sullivan once she pulls back from her insistence on school-based assessment. However, the Minister has said she has moved far enough and is seeking concessions from teachers.

In the meantime, the clash may already be having an effect. First year English, the one subject already following the new specifications, is being taught by teaches who have been unable to complete training due to ongoing industrial action.

“Their teachers have had nothing like the appropriate training,” said Pat King, general secretary of the ASTI who agreed that Tuesday’s action was a success.

“Teachers are not generally minded to go on strike or to walk out on schools but to a man and a woman they went out. The reaction from the public was a very positive response,” he said.

“[Industrial action in January] is going to happen unless there is a resolution. What happens beyond that I don’t know but we have a mandate to take a series of industrial actions and strikes.”

About 2,300 examiners are hired by the State Examinations Commission each year. Teachers are paid, between €4.13 and €11.17 per subject marked with each typically correcting between 250 and 400 papers.

A proportion of these are retired teachers. According to the Commission, recent figures show 340 of the 4,250 examiners required for both the Junior and Leaving Certificates were retired.

However, they do not have a vote when it comes to industrial action and both unions have been at pains to stress the dispute is about safeguarding the integrity of exams, and not money.