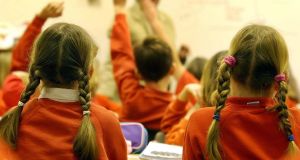 The restoration of allowances for new teachers is being explored in talks between trade unions and Government officials as a way of tackling pay inequality in the teaching profession. File photograph: Barry Batchelor/PA Wire

The restoration of allowances for new teachers is being explored in talks between trade unions and Government officials as a way of tackling pay inequality in the teaching profession.

These qualification allowances - worth up to €6,000 - were abolished for new entrants in 2012 as part of a series of measures aimed at cutting the public sector pay bill.

Teachers’ unions and Government officials have been discussing ways of narrowing the pay gap between new entrants and their more experienced colleagues in recent weeks.

However, any move to restore allowances may involve productivity measures in return.

Officials from the Department of Education and the Department of Public Expenditure met representatives from the Irish National Teachers’ Organisation (INTO) and the Teachers’ Union of Ireland (TUI) on three occasions earlier this month to discuss pay arrangements for newly qualified teachers.

The country’s biggest second-level union, the Association of Secondary Teachers of Ireland (ASTI), was not involved in the talks as it rejected the Lansdowne Road deal to reverse public sector pay cuts earlier this year.

The meetings - which took place on July 5th, 14th and 26th - have been described by all sides as “productive”. Talks are due to resume in August.

While neither side would comment on the details of the talks, it is understood they have focused in part on a recent agreement in respect of firefighters.

In that agreement, new entrants to the fire service had the value of their rent allowance - which was scrapped in 2012 - restored.

The agreement is widely seen as having set a precedent for other public sector workers.

New entrant teachers lost out on qualification allowances when academic allowances were abolished in 2012.

The estimated cost of reversing the decision to withdraw qualification allowances from new entrant teachers is about €16 million per year, based on Department of Education calculations.

Meanwhile, Joanne Irwin, the new president of the TUI, said pay parity for new teachers and lecturers will be a key priority of her term of office.

“We cannot allow a situation where reduced pay and low-hour contracts result in the teaching profession becoming increasingly less attractive to the country’s best graduates, when they can earn considerably more in industry and enjoy full hours, better job security and promotional prospects from the start of their career.”

She said the recent decision to restore allowances for firefighters was a “very important precedent that we can exploit”.

“The Irish Congress of Trade Unions has acknowledged the TUI’s role in highlighting the injustice of pay inequality and has committed to prioritising this issue for resolution within the Lansdowne Road Agreement, which TUI members are now covered by as a result of the decision taken in May’s national ballot,” she said.

Ms Irwin, a second-level business teacher in Donegal ETB, has served as vice-president of the union since 2014.

She also said the insecure employment conditions of those working in the further and adult education sectors and the underfunding crisis in institutes of technology were key issues for her.

She said she was looking forward to further engagement with Government officials on these issues over the coming weeks.