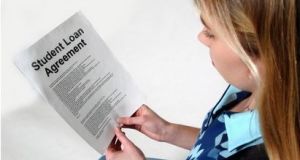 A major report to be published soon on the future of third-level funding will lean heavily on an income-contingent loan scheme as the only realistic option of funding the system. File photograph: Getty Images

The prospects of a student loan scheme for third-level education have sharply receded after Minister for Education Richard Bruton said any changes must be based on a political consensus.

A major report to be published soon on the future of third-level funding will lean heavily on an income-contingent loan scheme as the only realistic option of funding the system.

However, Mr Bruton said while Fine Gael has supported such a move in the past, the minority Government will require the support of major parties in any decision it makes.

Fianna Fáil has reservations over such a model, while Sinn Féin is strongly opposed to it.

In a media briefing, Mr Bruton said the current funding model – based on a student contribution charge of €3,000 and State contributions – was not sustainable.

“We will be sitting down with the Oireachtas, employers and universities themselves to see what models are there and is there a consensus around which model can deliver . . . we can’t deliver with the funding model we have,” Mr Bruton said.

In the meantime, he said he will seek to secure additional resources from the Government and try to improve access to higher education for disadvantaged students.

Fianna Fáil’s education spokesman Thomas Byrne said his party had concerns over the implications of a student loan scheme.

“We’re open to looking at options outlined in the forthcoming report, but there are huge disadvantages with a loan scheme – both for students and the State – as we have seen in the UK,” he said.

The numbers going to third level are projected to grow by 30 per cent over the next 11 years. Experts say an extra €1 billion is required just to keep pace with demand.

An expert group chaired by former union leader Peter Cassells has completed an unpublished report on funding options to help sustain and grow the sector over the coming years. Although the group presents a range of options, The Irish Times understands it leans heavily on an income-contingent loan model for graduates as the only viable way of generating funds.