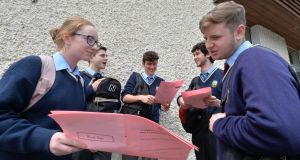 A critical shortage of engineering graduates is threatening vital infrastructure projects such as plans to build tens of thousands of homes, industry professionals have warned.

Latest figures show universities, colleges and further education courses are producing just a fraction of the engineers needed to meet projected demand over the coming years.

Some of the most severe shortages are in construction-related areas such as civil engineering.

The sector had more than 600 graduates in 2014. Next year it is anticipated there will be fewer than 40.

“During the economic bust secondary school students saw an industry in sharp decline and were scared away,” said Damien Owens, registrar with the professional body Engineers Ireland.

“The numbers are returning, but these new graduates won’t be available for another four or five years.”

PJ Rudden, chair of UCD engineering graduates’ association, said the shortage could not come at a worse time.

“The huge drop-off in the number of graduates is impacting now just when the economy and construction sector is really taking off.

“There are huge infrastructural gaps which need to be filled. If we don’t tackle it, it looks like we will end up importing civil engineers, just like we did during the noughties.”

These plans hinge on a supply of civil, electrical, technological and construction-related engineering skills.

“We’re finding that most graduates now have jobs or multiple job offers before they even finish their final exams,” Mr Owens said.

The trend is backed up by a recent report from the Higher Education Authority which found employment rates and salaries were among the best for engineering graduates. Starting salaries tend to be from €27,000 to €30,000.

New research by Experis Ireland – it specialises in IT, engineering and science recruitment – found that almost a fifth of more established engineers expect to secure a 20 per cent pay rise.

The survey, carried out in May of this year, showed some 92 per cent of engineers in Ireland were either “extremely confident” or “confident” of finding a new role

Despite this certainty it seems many students – or their parents – are not so sure.

“They haven’t responded to the vivid recovery, which is a surprise; it seems as if the public is still a bit sceptical,” Mr Rudden said.

Engineering is not helped by an image problem: fewer than one in five students studying so-called Stem subjects – science, technology, engineering and maths – are women.

Louise Campion, a civil engineer who graduated in 2012, said much of that is down to limited subject choice at second level as well as enduring misconceptions over the role of an engineer.

“Many people still think it involves using hardcore maths every day. But the way I was taught in third level was to use maths as a tool to everyday problem-solving...you don’t need to be a maths genius; you just need an enthusiasm for problem-solving.”