Asti, Tui members to vote on withdrawal of co-operation; Quinn say it is not an industrial relations dispute 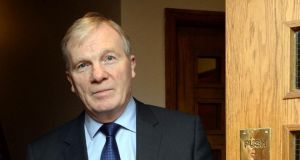 While second-level teachers were in favour of reform they have serious concerns about key aspects of what is proposed, Asti general secretary Pat King said. Photograph: Brenda Fitzsimons / The Irish Times

Two unions representing second level teachers, the Asti and Tui, are to ballot their members on withdrawal of co-operation with planned Junior Cert reforms.

The Asti’s decision to seek a vote from the 17,000 members of the Association of Secondary Teachers in Ireland (Asti) was made during a meeting of the union’s executive council yesterday.

The Junior Cycle proposals include a “number of educationally unsound reforms that have the potential to damage young people’s education,” the Asti executive council said in a statement.

While second-level teachers were in favour of reform they have “serious concerns about key aspects of what is proposed” Asti general secretary Pat King said.

Among his concerns were capacity of schools to implement reform “following more than five years of cutback”, the “threat to education standards in schools” and the potential for the reforms to “exacerbate inequality”.

Mr King also said that the Minister for Education Ruairi Quinn had “failed to engage with teachers” before announcing his reform plans.

“Teachers cannot stand back and allow the implementation of reform plans that that they believe will damage education,” he said.

The ballot will be on “withdrawal of co-operation with the implementation of the Junior Cycle Framework and on industrial action as decided by Central Executive Council,” the Asti said.

The Teachers’ Union of Ireland (Tui) is to ballot members on non-cooperation with the planned Junior Cycle changes. Its executive committee is to meet to decide on the wording of the ballot as well as a timeframe.

In a statement the union expressded disappointment that the Department had not provided the concrete details to allow it to consider proposals by Friday’s deadline.

“For several months, TUI has outlined significant concerns over the proposed changes, not least the capacity of schools to provide the programme in the wake of a litany of cutbacks,” Tui president Gerard Craughwell said in a statement .

“Change for which adequate preparation has not been made can cause lasting damage to the education system and particularly to individual students,” he added.

However Minister for Education Ruairi Quinn has said this was “not an industrial relations dispute”. “This is about quality and education and I think and I am prepared to have the department officials sit down and address professionally the concerns that they have and they will work through them,” he told RTE Radio today.

On Friday, talks between the Department of Education and teachers’ unions talks aimed at addressing teachers’ concerns ended without progress.

In a revised implementation plan, circulated to unions, the department offered to slow down the pace of reforms, seeking just one subject to come under the planned “continuous assessment” regime in each of the next two years.

It also increased its provision of training for teachers, including an allowance for closing schools for one day each year for in-school workshops as the reforms are introduced.

However, the Asti and the Tui said the department would not engage on the issues of “most concern” to second-level teachers.

Under the reforms, teachers will grade their own students over the course of the Junior Cycle in place of State exams each summer. The unions say they are concerned about the integrity of process, citing the absence of an appropriate form of national certification and the likely pressure on resources