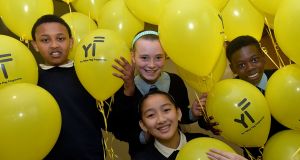 More than a dozen primary and secondary schools have received national recognition for their work in tackling racism and creating a more welcoming environments for minorities.

Under the yellow flag programme, schools volunteer to undertake ways to celebrate diversity, inclusion and difference within the school and the wider community.

At an event in Dublin’s Liberty Hall on Tuesday, 13 schools were awarded yellow flags for activities which ranged from a school trip to a local direct provision centre for asylum seekers, to a cultural cookery day for students and parents.

Ombudsman for Children Niall Muldoon said the programme was helping to change attitudes towards minorities in a positive way.

“Instead of asking people to stop being discriminatory or stop being racist, this programme is asking them to promote diversity and integration,” he said.

Despite the work being done by individual schools, surveys indicate that significant challenges remain.

A survey of more than 1,500 students in the schools awarded yellow flag status at Tuesday’s event showed that three out of ten reported experiencing racism in the pat year.

The same poll found eight out of ten would like their school to provide time to celebrate different cultures, languages, religions and identities.

The yellow flag programme, developed by the the Irish Traveller Movement, is aimed at creating cross-cultural understanding among the estimated 200 nationalities and cultures in the school population and broader community.

In the past seven years, the programme has more than 21,000 young people in 60 schools with students from over 83 different nationalities and cultures.

Paula Madden, the co-ordinator of the programme, said work to foster greater understanding of diversity was crucially important given the challenges posed by Europe’s refugee crisis.

“it’s more important than ever for children to see diversity normalised and that young people learn to relate to each other across cultural, religious and ethnic identities,” she said.

St John’s National School, one of the 13 schools recognised at Tuesday’s event, was hailed for its work both inside and outside the school.

Students helped organise a visit to the Mosney direct provision centre, where some of the school children are residents.

Elizabeth Daniel, a pupil and resident of the direct provision centre, she and others thought it would be fun to invite their friends to her home.

“It was so exciting for me to have my friends come to visit for the first time,” she said.

“When the buses arrived I just ran over and hugged them. We did lots of fun things that day. We drew pictures. We played with the parachute, we played basketball, football and we even had a disco … I didn’t want the day to end because it was one of my favourite days ever.”