Up to 40,000 students face losing 10% in their English exams due to union dispute 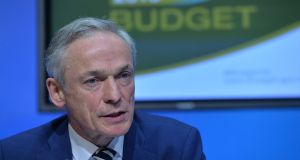 Richard Bruton, Minister for Education, will ask the ASTI that English teachers be given a derogation to “avoid disadvantaging current students any further”. Photograph: Alan Betson

Minister for Education Richard Bruton will today call on the Association of Secondary Teachers Ireland (ASTI) to suspend its opposition to junior cycle reform to ensure thousands of students do not lose 10 per cent in their English exams next summer.

The new junior cycle, which replaces the Junior Certificate, is being rolled out across all secondary schools and seeks to provide a much broader assessment of students’ achievements.

However, the biggest secondary teachers’ union, the ASTI, has directed members not to take part in any classroom-based assessments linked to the changes. This means up to 40,000 students – or two out of three junior cycle students – will have their exams marked out of 90 rather than 100 per cent.

The ASTI’s opposition to the junior cycle changes stems mainly from its belief that teachers should not have to assess their students’ work for State exams. It says there is scope for a compromise based on optional oral exams in the Junior Cert.

In these cases, students who do not take the oral component in a language exam at Junior Cycle do not lose any marks. The union insists it is still within Mr Bruton’s gift to ensure students will not be deprived of 10 per cent of marks if they do not participate in classroom-based assessments in English. But Department of Education officials say classroom-based assessments are not optional.

In addition, the State Examinations Commission has said it cannot award marks for a mandatory component – in this case an assessment task – which is not submitted to the commission for assessment. Fianna Fáil’s education spokesman Thomas Byrne will table a motion at an Oireachtas education committee this week calling on the Minister to immediately withdraw the “threat of punishment of students”. He said: “ No child should be punished nor their exam marks put on a negotiating table.”

However, the ASTI’s ban remains in place. Students are due to complete a second classroom-based assessment by early December, which is a collection of students’ writing, followed by a written reflection on their learning.

The written reflection will be marked externally and is worth 10 per cent of the final written exam. Students in ASTI schools will not be in a position to complete this, or any of the classroom-based assessments, due to the ban. But they will be taught the new curriculum as the ban does not extend to this area.