A major report published today on internet use among Irish children shows that, while they are rapidly developing their online skills, a higher proportion are reporting seeing distressing content when using laptops, tablets and smartphones.

One in five nine to 16-year-olds said they had accessed harmful or distressing content, double the rate in 2011.

In the 15-16 age bracket, the proportion saying they had seen something they wished they hadn’t – such as discriminatory messages, self-harm sites or forums discussing drug usage – was as high as 37 per cent.

The Net Children Go Mobile 2015 report, carried out through interviews with a nationally representative sample of 500 children by researchers at Dublin Institute of Technology, found just under half (46 per cent) had access to the internet from their bedrooms. And 14 per cent of this nine to 16-year-old cohort said they went online “a lot” after 9pm.

“Young people are always online, always connected and always available with no escape.”

However, he believes parents must be careful not to lecture children about internet use. “Children often pick up these habits from parents. Digital use is a matter for everybody.”

The report found 60 per cent of children believe they know more about the internet than their parents, with young girls claiming a more critical understanding than boys. 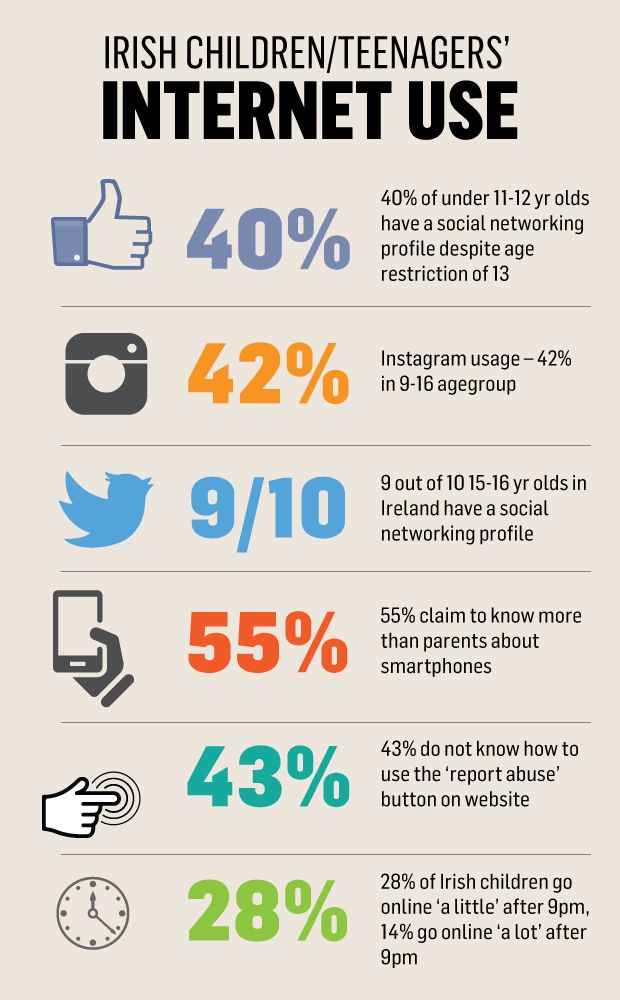 Not surprisingly, young people are becoming more dependent on social networking sites for communicating with their peers.

Nearly 40 per cent of those aged 11-12 admitted setting up a profile despite bans across most sites on users under 13 signing up.

This number has dropped since 2011, when 51 per cent of this age group were reportedly signing up to sites with phony accounts.

In the latest report, nine out of 10 in the 15-16 age bracket said they had a social networking profile, while 58 per cent reported using the internet excessively.

A 16-year-old boy interviewed during the research confessed: “With the internet connected constantly you’re never offline . . . Like, you always log Facebook on your phone, unless you log out . . . but it’s kind of a hassle to log in and log out. But even if you sit in class; you can have 10 seconds and check your newsfeed.”

Dr O’Neill blames peer pressure for the constant need to stay connected and worries it could lead to an increase in online bullying.

Girls seem to be most vulnerable to online bullying, with 26 per cent reporting abuse compared with 17 per cent of boys.

The rate of reported online bullying increased from 22 per cent in 2011 to 23 per cent in 2014, despite claims from sites such as Facebook and Ask.fm of increased regulation and moderation.

A 13-year-old girl interviewed for the study spoke of the abuse she suffered online. “I cried, it was an old friend, who was jealous of me that because I went to this new school and she saw I have more friends and so, she was very jealous, she said bad things about me like I was ugly and I wasn’t spending much time with her, and I spend more time with other new friends not with her.”

Reports of exposure to sexual images have risen from 17 per cent in 2011 to 21 per cent, with children encountering hate and discriminatory messages, anorexic or bulimic content, self-harm sites and sites discussing suicide.

“Stranger danger” is another issue for many children when they are exploring the web.

“This is a very extreme and rare form of danger in terms of predatory contact,” says Dr O’Neill. “The internet has access on a global stage to lots of potentially unsavoury individuals.”

However, he says perceptions of internet safety in Ireland are changing, with parents becoming more proactive and engaging with their children’s internet use.

Webwise.ie educates and promotes dialogue between children, teachers and parents on safe and appropriate use of the internet.

Breakthrough between EU and UK possible if there is will, says Taoiseach

Leaving Cert survival guide for stressed students (and their parents)

My son wants to drop Leaving Cert exams and opt for accredited grades. Is this wise?

I want to apply for a postgrad abroad. How do I go about it?

Pay rates in childcare are abysmal. Should I retrain as a primary teacher?

I’m worried CAO points will soar. Are there alternative options?