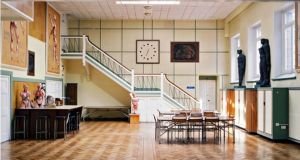 The old anatomy building inTrinity College will be open for events during the festival. More than 800 Trinity medical graduates fought in the first World War.

The name Almroth Wright will mean little to military historians but this graduate of Trinity College Dublin was responsible for saving more lives than any other individual in the first World War.

That’s according to Dr Joe Duignan, who is delivering a talk as part of the Discover Research Dublin event this evening, on the “huge contribution” Irish medics made to the war effort a century ago.

A third of medics in the Royal Army Medical Corps were Irish, and the remainder included the Dublin-educated, English-born Wright, who developed an anti-typhoid vaccine which led to a dramatic fall-off in wartime casualties.

The story of his innovation, as told by Dr Duignan, drawing on new research, will be presented in one of more than 50 free events open to the public this evening, aimed at promoting public appreciation of science.

The festival, hosted by TCD and the Royal College of Surgeons in Ireland (RCSI), is in its second year and is part of a Europe-wide initiative that is taking place simultaneously in cities across the continent.

Dr Duignan, a surgeon who has collaborated on research for a book on Irish doctors in the first World War for publication next year, said that of 3,305 Irish medics involved in the war 1,043 were from TCD. Similar numbers came from RCSI and the National University of Ireland, illustrating volunteerism from across the religious divide.

“We started off with the thought that it was all the Protestants who went but we discovered that was not the case at all,” he said.

Other events for the festival include a Lego design challenge, 3D visualisations of the brain, and a debate on “the purpose of research” involving neurologist Orla Hardiman and members of Trinity’s Philosophical Society.