Q&A: All you need to know about the new CAO points scale 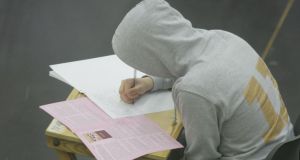 The CAO points system is changing to try to take some of the heat out of the points race. By reducing the number of grading bands from 14 to eight, students may feel less inclined to chase marginal gains in the Leaving Cert.

Why are the points changing?

It is trying to take some of the heat out of the points race. By reducing the number of grading bands from 14 to eight, students may feel less inclined to chase marginal gains in the Leaving Cert. There is also a safety net of 37 points for grades of 30-39 per cent - currently an E or “fail” - in higher level papers.

Some of this sounds familiar.

Indeed. Before 1992 there were only seven grading bands: A, B, C and so on. But concerns about the use of random selection to allocate college places led to the introduction of half-grades: A1, A2, B1 etc. The Department of Education now believes this was a mistake, saying it led to a system that was unique internationally in being so finely calibrated.

Will it lead to more random selection now?

No, according to Maynooth University president Philip Nolan who helped design the scheme. He predicts the new scale will result in “somewhat less” random selection than the current model. This is due to the fact that points will no longer go up in margins of five. Rather, they will go up by an order of eight to 11.

When students add up their best six subjects, a greater variety of points totals will emerge. He stresses, however, that random selection can’t be eliminated entirely, especially for high-points, fixed-intake courses.

What is happening to bonus points for Maths?

It stays. Students getting a grade of 40 per cent or above in the higher level exam will get 25 bonus points. For a technical reason, 25 was a good figure to retain for the bonus as it helps to create further diversity in points totals.

According to Nolan, the justification for the bonus is the “very significant added work for the student” in taking higher level Maths, and it’s only coincidental that Ibec and the American Chamber of Commerce endorse it.

Does the new scale reward stronger or weaker students?

While direct comparisons can be misleading, it will certainly raise the points total of weaker students. A student getting two grades of 55 per cent, two of 45 per cent and two of 35 per cent will get 278 points under the new scale compared to 220 points currently.

In contrast, a student getting two grades of 95 per cent, two of 85 per cent and two of 75 per cent at higher level will get 530 points under the new scale, 10 points less than on the current scale.

What happens to my points if I’ve already sat the Leaving Cert?

Students who got an E grade (25-39 per cent) at higher level will be awarded 33 points retrospectively. More details can be found at www.transition.ie/.

Is it worth deferring college to reap the benefits of the new scale?

In certain cases, it could be tempting. If you got six B1s you’d currently get 510 points, for example, but this would rise to 528 points under the new scale. However, Nolan says “you would be foolish to defer a place this year” the hope that you might get a better place in 2017 because the course might be 20 points higher on the CAO listings.

What else is planned?

Colleges have pledged to introduce more general entry courses, and to reduce the number of “niche” courses on the CAO which force students to specialise at an early stage. As well as helping to dampen points inflation, such courses further reduce the risk of random selection because “in general those broad entry courses tend to be more elastic,” Nolan explains. “It’s easier to let more students in and distribute them over modules than a small specialised course.”

Up to a point, perhaps. But if the aim is to reduce the focus on rote learning and teaching to the test something like an extension of the Junior Cycle reforms to the Senior Cycle is required.