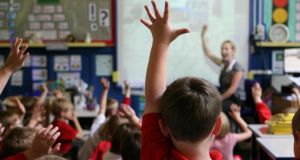 Primary schools began collecting the information for the Primary Online Database at the request of the Department of Education at the start of the current school year. Photograph: Dave Thompson/PA Wire

A new database of primary school students will gather personal information, including PPS numbers, information on ethnic and cultural background and religion. Some details will be kept for up to 30 years, it has emerged.

Some of the data gathered will also be shared with other State bodies, such as the Central Statistics Office, the Child and Family Agency, the Department of Public Expenditure and Reform and the Department of Social Protection.

Primary schools began collecting the information for the Primary Online Database at the request of the Department of Education at the start of the current school year.

Schools for children with special needs have this week begun writing to parents to inform them that they have been asked to add details about their children to the database from early 2015.

“As pupils enter school and progress through first and second level, it is vital to record information on numbers entering, transferring, dropping out as well as completing at each level,” the department said in a statement.

The department said such individualised data coverage had already been in place for a number of years at pre-primary, post-primary and third level education.

The data is “an extremely valuable resource in monitoring the progress of all students through the education system, including vulnerable sub-groups, developing education policy, forward-planning, and underpinning payments and teacher allocations to education institutions”.

In the future, the department said it would be able to track pupils from early childhood education to primary school and on to post-primary.

This would allow it to ensure that every child in the State of compulsory school age was in education.

“All bodies supported the introduction of an individualised pupil database.”

A PPS number was an individual’s unique identification number for all dealings with the public service, including social welfare, tax, education and health services.

One parent who spoke to The Irish Times, however, said the Department of Social Protection had not been notified of the proposed use of the PPS number as a unique identifier, as required under legislation. He also said the retention period of 30 years for the student data was “excessive”.

In its statement, the department said it took the protection of pupils’ data “very seriously”.

“It is departmental policy that only a small number of departmental staff, who have a specific requirement which is related to their work, have access rights to view the personal data of students.”

The Irish National Teachers’ Organisation welcomed the database and said it had been calling for it for a decade.