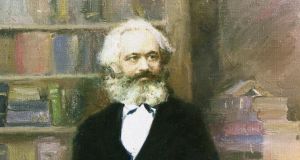 A new Leaving Cert “politics and society” subject is to be introduced next year and will require students to be familiar with political thinkers such as Karl Marx (above). File photograph: Imagno/Getty Images

A new “politics and society” subject is to introduced to the Leaving Cert syllabus next year and will require students to be familiar with political thinkers such as Karl Marx, and to critically evaluate ideas such as capitalism.

It is understood that students in about 25 schools will begin studying the subject in fifth-year from 2016, and points will be awarded for the first time in 2018.

A formal announcement, inviting schools and teachers to participate in the new subject, is expected later this week.

The State advisory body on the national curriculum has prepared a detailed paper on the subject, setting out the course structure and content.

Overall, students will be required to learn about power and decision-making at local and international level, and about human rights and globalisation.

In power and decision-making, for example, students should be able to identify left-wing and right-wing political positions. They will also be expected to explore ideas behind different ideologies.

The course will include a focus on voting systems in the Oireachtas, ownership and control of the media, and definitions such as social class and patriarchy.

Students should also be familiar with thinkers such as Thomas Hobbes, John Locke, and UCD academic Kathleen Lynch.

It is understood teachers with a degree or post-graduate qualification in areas such as politics, sociology and anthropology will be considered in the first group of teachers to deliver the course.

Second-level schools are due to receive letters over the coming days inviting them to participate.

A Department of Education and National Council for Curriculum and Assessment implementation group will select the first schools.

The subject is designed to be taught in 180 hours, or a double-class period each week.

The subject will be offered at higher and ordinary level, with a written exam accounting for the majority (80 per cent) of points.

It will also involve a citizenship project undertaken by individual students which will attract 20 per cent of final marks.

This is aimed at giving students an opportunity to evaluate ways of becoming involved in civic, social or political life.

The brief for the citizenship project will be based on a number of suggested topics, prepared annually by the State Examinations Commission.

The section on human rights and responsibilities will require students to explore the way in which their right to education is framed.

This will include being familiar with treaties or legal documents such as the Constitution and the UN Convention on the Rights of the Child.

The concept of equality of rights will also be explored, as well as basic human rights in documents such as the European Convention on Human Rights and UN treaties.

A document detailing the specification of the curriculum states that the course content will link into subjects offered at higher education, including sociology, political studies and philosophy.

Are there any other subjects you think should be included in the Leaving Cert? Let us know in the comments section below.