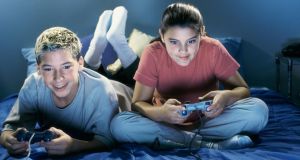 Playing occasional video games can help to boost students’ performance in maths and other test results, according to an international study published Thursday.

However, the Organisation for Economic Co-operation and Development (OECD) report suggests that playing such games on your own is more beneficial than taking part in collaborative online gaming.

The claims are made in an analysis of gender differences in the OECD’s Programme for International Student Assessment (Pisa) tests, which are carried out every three years on 15-year-olds across 64 countries including Ireland.

Noting how boys spend more time playing computer games than girls, the report says this impacts on their education not only by reinforcing particular thought patterns but also by “crowding out” other activities such as homework.

Video gaming among Irish teenagers was lower than the OECD average but the gender difference in the time spent so playing was deemed statistically significant.

In other findings, the report found lower levels of confidence among girls in doing maths, blaming this on negative messages picked up by parents and teachers.

Some 34.4 per cent of girls in Ireland reported feeling helpless doing maths problems compared to 21.9 per cent of boys. This gender disparity was one of the largest among OECD countries surveyed.

Regarding the impact of video gaming, the report says results from PISA tests “suggest that the association between academic performance and video gaming depends on the kinds of games students play and how frequently they play them,” the report continues. 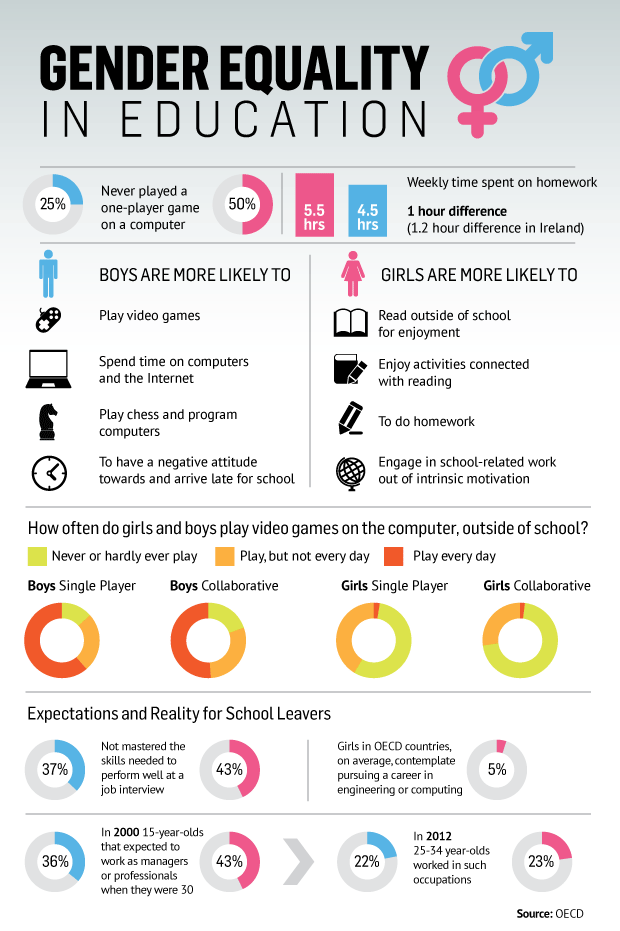 “They also perform better than students who never or hardly ever play such games. By contrast, collaborative online games appear to be associated with lower performance, regardless of the frequency of play.

“Because boys tend to be daily users of video games and are much more likely than girls to play online collaborative games, the gender gap in video gaming translates into a performance advantage for girls.”

The study, entitled ‘The ABC of Gender Equality in Education: Aptitude, Behaviour, Confidence’, examines not only why boys do worse than girls in PISA test scores on average but also why girls are under-represented in science and engineering courses after school.

In 2012, across all OECD countries, 14 per cent of boys and 9 per cent of girls did not attain the PISA baseline level of proficiency in any of the three core subjects measured - reading, mathematics and science.

Among higher performing students, however, girls did worse than boys in mathematics, expressing “strong feelings of anxiety” towards the subject.

“This gender difference in the ability to think like a scientist may be related to students’ self-confidence. When students are more self-confident, they give themselves the freedom to fail, to engage in the trial-and-error processes that are fundamental to acquiring knowledge in mathematics and science,” the report says.

The disparity between boys and girls in advanced mathematics is marginally greater in Ireland than the OECD average. When it comes to choosing a career, Irish students are also more likely to follow traditional gender roles than the OECD norm.

Significantly more girls than boys envisage going into health services, while the reverse applies for engineering, science and architecture.

Linking volume of homework to improved scores in PISA, the OECD says on average for each hour per week students spend doing homework, they score 4.5 points higher in reading and mathematics and 4.3 points higher in science.

Irish girls spend just under eight hours a week doing homework assigned by teachers, 1.2 hours more than Irish boys on average. Across the OECD, girls spent an average of 5.5 hours on homework per week, an hour more than boys.

The study notes that girls tend to invest greater effort than boys in “low stakes” tests such as PISA. This bears out research showing “boys are more responsive to extrinsic motivation than girls”.

When told that the PISA tests would be counted towards their school marks boys reporting putting in greater effort. This response was particularly noticeable in Ireland, along with Finland, Russia and a handful of other countries.

The report also reveals that teachers consistently give better marks to girls than boys in maths, even when they perform similarly in the OECD PISA maths test.

“The evidence suggests this may be because girls are more attentive in class and behave better and are marked up as a result.”

In the long term, says the report, this will hurt rather than help girls, as employers reward people for what they know and can do more than grades at school.