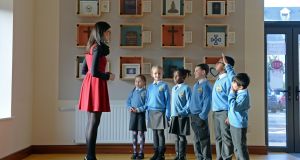 It is five years since former minister for education Ruairí Quinn set up the Forum for Patronage and Pluralism, aimed at ensuring our primary-school system reflects the diversity of the population.

Its report recommended that about 50 schools, in 47 catchment areas, be divested. To date, progress has been achingly slow and divisive.

Only eight or so have completed the divestment process, due to a range of obstacles, such as local resistance to change, parental fears and opposition from locally based clergy.

The result is a school system which is well out of step with modern Ireland. Some 96 per cent of primary schools remain under the control of religious denominations, despite an ever-more-pluralist society.

Undeterred by past experience, the new Minister for Education has announced ambitious plans to increase the number of multi-denominational schools to 400 within 15 years.

This represents about 20 multi-denominational schools per year, a near-trebling of the current rate of progress.

So, if the existing divestment process has not worked out to date, then why should we expect these new plans to be any more successful?

Richard Bruton insists the existing process of divestment is bedding down and starting to gain traction. But he says he believes rapid progress can be made by providing for four different models of delivery.

They include breathing new life into the existing process of divestment, joint patronage with other bodies and new schools.

It is questionable how fast these models can increase the number of multi-denomination schools.

For example, just 14 new schools - which invariably are multi-denominational - are expected to be built in areas of population growth over the next six years.

But the option he appears to see as providing real scope for speedy change is the growth of the Community National School model.

This relatively new model of school offers a new way around the so-called “baptism barrier” by ensuring all faiths and beliefs are catered to.

The system was developed as part of a pilot project in 2008 by the Department of Education, and there are now 11 community national schools around the country.

Mr Bruton said the model has some clear advantages such as State control, flexibility and parental choice.

Its patron body, the Education and Training Board of Ireland (ETBI), presents it as the ideal solution to the fiercely contested question of how to ensure our education system caters to all members of the community.

“We think it is the answer to the whole issue, really,” says Michael Moriarty, general secretary of ETBI.

Unlike Educate Together schools, this model of schooling allows for “faith nurturing” classes and sacramental preparation during the school day.

Although children are educated together in a broad-based, multifaith religion class for most of the school year, they divide into four different religious education groups for up to four weeks during the school year.

“Respect for the plurality of faiths in the local community is balanced with an equal respect for those of no specific faith,” says Moriarty.

“To accommodate this demand, we provide periods within the timetable of the school year when some children form into different groups for faith nurturing. Others can form a nonfaith group during these times, all in accordance with the wishes of their parents.”

Catholics are typically in one group, other Christians in another, Muslims in a third, and Hindus, Buddhists and Humanists in a fourth.

A faith-based breakdown of all community national schools confirms the diversity of religion in the classroom. The majority faith is Catholic (44 per cent), followed by other Christian faiths (25 per cent), Muslims (16 per cent) and Orthodox (7 per cent).

Some in the sector see community national schools as a half-way house between schools under religious patronage - which provide faith formation - and Educate Together schools, which do not.

They also are more traditional in that schoolchildren typically wear uniforms, for example, and tend to refer to teachers as “Mr” or “Miss”, unlike with more liberal approaches.

Not everyone is enthusiastic about the model, however. Educate Together says these schools do not provide a viable alternative to denominational education in Ireland.

It says the school model “sanctions the segregation of young children” by separating them for faith formation classes.

“ Educate Together believes that separate can never be equal, and that from an educational point of view, it is not desirable to imprint religious difference on very young children in a classroom,” it said, in a statement earlier this year.

“Children entering primary school are taking their first steps in a formal social setting and may be interacting with children of different ethnicities, social status and religious background for the first time. The messages given at such an important threshold in life are extremely important.”

It also says it has concerns about the “transparency” of the model and says it should not be rolled out before any independent evaluation of the model has been undertaken or published.

Some in the sector also claim the model is “too close to the Church” and point to records released under the Freedom of Information Act to RTÉ a number of years ago.

They indicated that the church insisted to the Department of Education that faith formation in these schools was a “minimum non-negotiable requirement” for their support of the new model.

No other religious organisation actively looked for this, the records indicated, and some – such as the Church of Ireland and the Methodist Church – warned against it.

Officials in ETBI, however, say these records related to discussion about the model in its infancy.

They insist that community national schools have since moved to establish a strong identity of their own and receive strong support from a range of faith groups and parents.

There is no mistaking, however, that as far as the Catholic Church is concerned, community national schools are a more palatable option when it comes to divestment than most others.

Last year, Fr Michael Drumm, chairman of the Catholic Schools Partnership, which represents Catholic bishops in the education sector, gave a clear impression that it was willing do to business with this model.

He said at a conference that “patronage was adaptable”, and he would welcome alliances with other patrons.

The Catholic Church, he noted, was already in partnership with Education and Training Boards in more than 40 secondary schools or community colleges.

In these cases, the ETBI has typically given guarantees to the church over issues such as faith formation classes and ethos.

Fr Drumm said there was scope for mirror structures at primary level.

“There are already models of joint patronage at primary. Catholic and Protestant bodies are joint patrons in a small number of schools. So there is any amount of models of partnerships,” he said. “It should not be perceived to be ‘it’s just this way’; patrons can share with other patrons.”

In the meantime, community national schools - like many others - are grappling with the issues thrown up by our diverse school population.

It has developed a common religious education programme aimed at all their students.

The “Goodness Me, Goodness You” course material describes it as an ethical and moral education programme where all pupils together learn about themselves and their world, as well as respecting diversity and difference.

It’s a model which Michael Moriarty feels works in a changing Ireland where parents want greater choice, but may want to hold on to some of the traditions of the existing education system.

“We’ve been in the shadows for a number of years,” says Moriarty. “But we feel this is a great time to grow. We’ll be applying for the patronage of new schools and we feel we’re ideally placed to reflect new communities.”