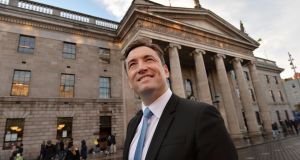 John Concannon: has been appointed to a new role of vice-president (development) in NUIG. Photograph: Alan Betson

The head of the Government’s defunct Strategic Communications Unit (SCU) John Concannon has left the civil service to take up a senior appointment with National University of Ireland, Galway.

As assistant secretary in the Department of an Taoiseach, Mr Concannon was the head of the short-lived unit which was disbanded after a controversy of its handling of the Project Ireland 2040 campaign.

Mr Concannon has been appointed to a new role of vice-president (development) in NUIG. He will be responsible for new developments that will grow student numbers, programmes, and research activities. That will include major new building development, work previously conducted by the NUIG Foundation.

The new position is one of four new senior appointments announced by NUIG president, Professor Ciarán Ó hÓgartaigh, to lead the University’s work in internationalisation, science & engineering, university development and the student experience.

Prof Becky Whay will be joining in the role of vice-president: international; Dr Michelle Millar is the new dean of students; and Professor Walter Gear is the new executive dean of the college of science and engineering.

“These appointments reflect the ambition, values and sense of purpose, people and place underpinning the new strategy for our university which we look forward to publishing later this year as we begin the next exciting chapter of NUI Galway’s development.”

The SCU was disbanded after a controversy surroundings its communication campaign for Project 2040, the Government’s capital plan for the next two decades. It faced criticism that “advertorials” it placed in newspapers favoured Fine Gael candidates, a charge strenuously denied by Mr Concannon.

Before the controversy, Mr Concannon had made his name as a communication and marketing specialist after pioneering such initiatives as The Gathering, the Wild Atlantic Way, and the year-long 2016 Commemoration.