Number of CAO courses needing 500 points up by 25% 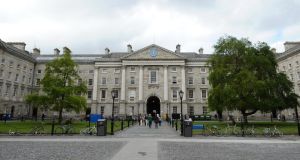 At Trinity College Dublin, engineering is up 25 points to 495, although not all applicants will get in on that score, while engineering with management is up 45 to 505. Photograph: Paul Ellis/AFP/Getty

The number of degree courses requiring 500 points or more has jumped by more than 25 per cent in this year’s Central Applications Office (CAO) listings.

Business studies, engineering and law are among the biggest movers, while points for science were up at all universities with the exception of UCD and Trinity College Dublin, where they dipped slightly.

The growth areas mirror sectors of the economy that are recovering, with students adjusting their first preferences based on the changing job market.

But there is also continuing evidence of institutions inflating CAO points by putting on niche courses with a very small number of places, an issue first highlighted by The Irish Times last year.

New figures obtained by this newspaper under the Freedom of Information Act show that more than 12 per cent of honours degree courses listed by universities and institutes of technology are taking in fewer than 10 students.

Some of the biggest points movers this year had very low intake, among them energy systems engineering at NUI Galway, which took in just six students in 2014. It was up 75 points to 505.

There was no manipulation behind the headline figures, however, with engineering at UCD, the country’s largest course in the discipline with an intake of more than 250 each September, up 15 points to 510. Five years ago, the entry level was 425 points.

At TCD, engineering is up 25 points to 495, although not all applicants will get in on that score, while engineering with management is up 45 to 505.

At TCD, business, economic and social studies (BESS) is up 15 points to 510, and the pattern is mirrored around the country with finance at UCC up 25 points to 505.

Leaving aside medicine, and those courses which are given additional points due to portfolio work, there are 96 level-8 degree courses this year requiring at least 500 points, up from 76 last year.

Some 52,028 CAO applicants are being issued with offers today via the CAO’s website from 6am.