McHugh insists summer programme will not exclude children with disabilities 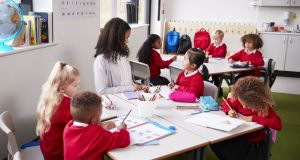 Groups which attended a meeting with officials on Thursday expressed alarm that draft proposals for a summer programme were ‘extremely limited’ in scope. Photograph: iStock

The Minister for Education has played down concerns that thousands of children with special needs could be excluded from a Government “summer programme” for vulnerable children in school.

The programme, planned for July, comes in response to rising concern from parents and disability groups over the impact of long-term school closures on children with additional needs.

Groups which attended a meeting with Department of Education officials on Thursday to discuss the proposals expressed alarm that draft proposals were “extremely limited” in scope.

Inclusion Ireland, the support group for people with disabilities, said the department indicated that only children attending special schools or classes will be able to attend the programme this year.

“Children with intellectual disabilities and autism have been out of school since early March and many of these young people will now not return to school until September at the earliest,” said Mark O’Connor of Inclusion Ireland.

“Inclusion Ireland calls on the Minister to widen the scheme to include all children with intellectual disabilities. Parents tell us these children are regressing educationally and will have difficulty in recovering this ground if it is ever recovered.”

Autism charity AsIAm also said it was “extremely disappointed” at the proposals which, it said, could exclude thousands of children with autism in mainstream classes who typically take part in the suspended July Provision scheme.

Under this scheme, about 10,000 children benefit from home tuition or in-school support.

“A failure to provide the required support now will undoubtedly lead to increased instances of school refusal, suspension and expulsion and poorer outcomes,” he said.

“We’re calling on the Minister to ensure that all students can access a level of support throughout the summer, and include the option of a face-to-face service at home for students who cannot access support in school.”

In response, a spokesman for the Department of Education said both the Minister and the Taoiseach were committed to the summer programme and that no decisions have been made.

“A proposal is being developed and the Minister is due to update Cabinet colleagues next week,” he said.

“Anybody who has been eligible in previous years will be eligible again this summer. We are working on providing both a school-based scheme and a home-based scheme.”

He said it is “not the case that only children who are in special classes or special schools will be able to avail of the programme or attend any service offered as part of the programme”.

“We are committed to running a programme and we are endeavouring to ensure it is as comprehensive as possible with the support of schools, principals, teachers, SNAs and also the families who may wish to avail of it,” the spokesman added.