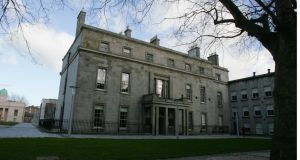 The Department of Education and Science in Dublin. Photograph: Bryan O’Brien

Data provided by the Department of Education in response to a Freedom of Information request shows that one teacher received a lump sum of €165,974 under the generous pension scheme.

The tax-free lump sum was the top amount paid to a retiring teacher in the primary and post-primary sector last year.

The highest amount received by a primary school teacher was €143,672.

But the figures show the exodus of primary and secondary school teachers from the public service has slowed overall, with a 54 per cent drop in the lump sum payments from €172.4 million in 2012 to €79.3 million last year.

Benefits are payable from the age of 55 provided the teacher has 35 years of pensionable service. For teachers who joined the profession after 2004, however, benefits are not payable until they reach 65.

The figures also show the growing burden of pension payments to the exchequer with €414.9 million paid to 13,710 retired primary teachers last year. This compared with €398.8 million in pensions paid to 13,400 such teachers in 2012.

“Private-sector employees can only stand and wonder at the riches in the parallel universe that is the public sector,” he said.

Sean McMahon, president of the Irish National Teachers’ Organisation (INTO), said: “Teachers are ordinary members of society who have suffered quite a lot with the demise of the Celtic Tiger.”

INTO national executive member Pat Crowe said the terms of public pensions had gradually got worse over the last number of years “while private sector pensions have been absolutely gutted”.