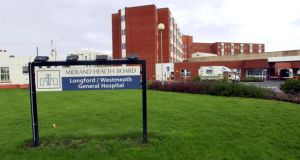 Michael Warren was rushed by ambulance to the Midlands Regional Hospital in Mullingar where he was being treated for his injuries. He passed away in hospital early on Tuesday. File photograph: Bryan O’Brien/The Irish Times

There was a sombre mood at a midlands school on Wednesday as Leaving Cert students arrived to collect their results.

Michael Warren (18), who in June completed his exams at Templemichael College, Longford, died on Tuesday from injuries sustained in a car crash in the early hours of Sunday morning.

Five people were in the car when it crashed into a ditch on the Ferefad to Ballymacormack road at about 3.50am.

The driver and other passengers in the car were uninjured.

Michael Warren was rushed by ambulance to the Midlands Regional Hospital in Mullingar where he was being treated for his injuries. He passed away in hospital early on Tuesday.

Counsellors from the National Educational Psychological Service were due to attend Templemichael College to offer support to his classmates and friends.

Michael, who was from Newtownforbes, was due to pick up his Leaving Cert results at the school on Wednesday.

“Our sympathy and thoughts are with Michael’s family and friends at this tragic time.

“We need to support the members of our school community who have been affected by this tragic event and have implemented our critical incident management plan.

“Counsellors and psychologists from the National Educational Psychological Service (NEPS) will be in attendance at the school on Wednesday to offer care and support to those affected at this difficult time.”