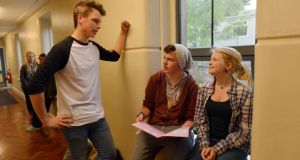 There was a collective sigh of relief as students across the country opened Mathematics Paper 1.

While debate around the new Project Maths syllabus and approach continues, students will have been satisfied with a higher level paper that, while not without its difficulties, could certainly have been worse.

According to Aidan Roantree, senior maths teacher at the Institute of Education, students had been apprehensive about the style of the new calculus questions on the paper. Those fears proved unfounded, however, as the calculus for the most part was “accessible and fair”, Mr Roantree said.

In fact, a feature of the paper was the absence of any difficult differentiation, according to Mr Roantree. Differentiation comprises “a significant part of the syllabus and one which would have taken a lot of class time,” he said.

“The differentiation was very easy,” agreed John Brennan of the Ballinteer Institute and projectmaths.com. “Most students will have been delighted with such an accessible paper.”

While the paper was not without its tricky parts, most of the questions could have been attempted at the very least.

Question one was “fine”, according to Mr Brennan, while the final part of question two on complex numbers might have appeared unusual. “If students applied methods from Trigonometry or Co-ordinate Geometry they would have found it quite manageable,” Mr Roantree said.

Question five, on integration, was “very heavily flagged” and would have come as no surprise to students, Mr Brennan said. Question eight, however, based questions around a new footbridge at Mizen Head, and was trickier. “Weaker students would have had trouble with that one,” Mr Brennan said.

Eamonn Toland of TheMathsTutor.ie expressed concern about question nine, which he said was, “especially challenging. Part (e) does not seem to have a clear-cut answer.”

There was one major surprise in the absence of a question on financial maths, according to Mr Roantree. “This was partly made up for by a question on exponential decay, a related idea,” he said.

Ordinary level students may not have been as happy as their higher level counterparts upon leaving the exam, according to Mr Brennan. “I thought that this paper was trickier for the level of the students sitting it than the higher level paper was,” he said.

Not everyone agreed with this assessment. Jean Kelly, maths teacher at the Institute of Education, believed students would have been pleased, pointing out that “Overall there were very few topics asked and even the harder topics that did feature on the paper weren’t that demanding.”

Section A of the paper was manageable, according to Ms Kelly, with straightforward questions and clear language throughout. “The questions were similar to the sample papers given out last year,” she said.

Section B presented nothing unexpected, although weaker students would have struggled with certain questions, Mr Brennan said.