Expert reaction: students required to ‘think outside the box’ 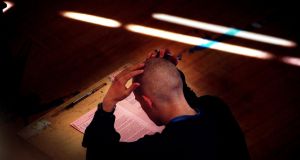 Biology is the most popular non-compulsory subject, with 34,921 (62 per cent) of students sitting the paper this year. Photograph: Bryan O’Brien

Biology students faced a tough paper which spanned a wide variety of topics on the syllabus and required students to have an in-depth knowledge of the course, according to teachers.

Teachers and students were taken aback by the relatively small amount of genetics on the higher-level paper.

Una Moroney, subject representative for the Irish Science Teachers’ Association and a teacher at the Intermediate School in Killorglin, said it had been a testing paper for the last few years, and that students would have to really work hard and think carefully.

Luke Saunders, of StudyClix.ie, said well-prepared students would have been immediately put at ease by the appearance of questions on the circulatory, skeletal and reproductive systems as well as questions on both the eye and the ear.

Mr Saunders and Ms Moroney agreed that some of the language on the higher-level paper was particularly difficult.

Mr Saunders said: “Some students would have found some definitions a little challenging, particularly piloerection (goosebumps) and thigmotropism (the turning or bending of a plant in response to touch).”

Mona Murray, a biology teacher at the Institute of Education, said some of the questions were quite indirect and required students to think outside the box, including one which required them to apply their knowledge to an unseen situation that they would not have covered in their textbook.

David Duffy of the Teachers’ Union of Ireland said the higher level paper was “okay, but the phrasing of a few questions would have caused problems for the less able students”.

Mr Saunders said the ordinary- level paper was not as straightforward as in previous years. “Several questions examined some parts of the course in quite a bit of detail. For example, the human reproduction question focused mainly on infertility.”

Biology is the most popular non-compulsory subject, with 34,921 (62 per cent) of students sitting the paper this year.


* This article has been amended to correct a wrongly-attributed quotation.