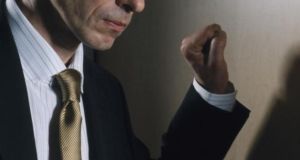 Journalists are over-reliant on official sources and would do well to emulate academic researchers who draw on “multiple sources”, a conference on journalism was told today. Photograph: Getty Images

Journalists are over-reliant on official sources and would do well to emulate academic researchers who draw on “multiple sources”, a conference on journalism was told today.

Dr Tom Clonan, a security journalist, said the issue was particularly the case among crime and political journalists.

He was speaking at European Journalism Training Association conference in Dublin.

The EJTA is based in Brussels and brings together over 50 journalism schools from 24 countries across Europe.

It aims to foster co-operation in the development of journalism training.

Dr Clonan said the over-reliance of the “official version” of issues was shown to be the case most starkly in the recent coverage of the allegations of Garda corruption made by Sgt Maurice McCabe and former Garda John Wilson.

Journalists were very dependent on official sources for information and to get stories, and so were vulnerable to accepting uncritically their sources’ accounts of events.

“If you look at the news 80 to 90 per cent of the coverage is based on information from official or establishment sources,” he added.

The conference also discussed how best to encourage investigative journalism.

Croatian journalists Ana Ledenko and Lucija Pongrac presented research they had done among journalism students on their perception of investigative journalism.

Those who were interested said it was “the only type of journalism” which was appreciated and where journalists could show their intelligence.