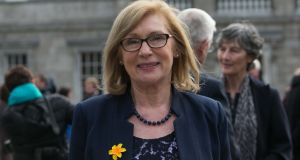 The outgoing Minister for Education Jan O’Sullivan will not attend this year’s teachers’ conferences.

A spokesman for the Labour Party Minister said: “The teachers’ union conferences allow the minister of the day the opportunity to set out future policy direction for the coming 12 months and beyond.

“Given the outcome of the election, Minister O’Sullivan is of the view that it would be inappropriate for her to engage on such a basis while a new government is being formed.

“After careful consideration and consultation with the three teacher unions, the Minister has decided not to attend,” he said.

This year’s conferences, held by the ASTI, TUI and INTO, will take place in Wexford, Cork and Killarney during the Easter school break in late March.

Ms O’Sullivan’s spokesman said Department of Education officials will be in attendance at all three conferences to ensure that attention is paid to the views of teachers.

Ministers have received mixed receptions at the conferences in recent years.

Former minister for education Ruairí Quinn was booed and heckled at the INTO conference in 2014.

Mr Quinn was also heckled at the ASTI conference in 2014 while making a speech about Junior Certificate reform.

Ms O’Sullivan received a warmer reception when she attended the TUI and INTO conferences in 2015, but was not invited to last year’s ASTI’s conference.

A spokesman for the TUI said they had invited Ms O’Sullivan to attend this year’s congress.

A spokeswoman for ASTI confirmed they also invited Ms O’Sullivan to address their conference this year.

“There are unusual circumstances this year because there is no new minister for education appointed and Jan O’Sullivan won’t be dealing with the issues we will be discussing at the conference,” she said.

The spokeswoman said they would like whoever is appointed as the new minister to address the conference.

The 18,000-strong Association of Secondary Teachers, Ireland (ASTI) is due to debate motions at its convention that would place the union on collision course with the government over pay and productivity reforms, as well as changes to the junior cycle.