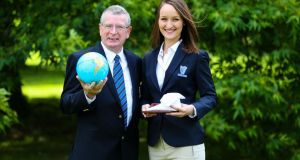 A group of Ireland’s top young apprentices gave up their summers to train for the WorldSkills Competition in Sao Paulo, Brazil, last week, and it paid off.

They will fly home with two gold medals, eight medallions of excellence and an 11th place ranking out of 70 countries.

Alina Sile, who turned 22 during the competition but postponed her celebrations until after Sunday night’s closing ceremony, won one of those gold medals in her chosen trade – restaurant service. Originally from Latvia, she has studied at Shannon College of Hotel Management for the past three years.

Ms Sile was one of 14 teammates, all under 25, who competed in various trades at what is often called the olympics for apprentices. Held biennially, it is the world’s largest professional education event, and 1,200 competitors took part this year.

Ros Wynne (24), from Dooradoyle, Co Limerick, took home the other gold medal, for aircraft maintenance. It is Ireland’s fourth consecutive gold medal in that category.

“I always enjoyed working with my hands. While looking for a challenging, active job, I stumbled upon aircraft maintenance and have never looked back since,” said Wynne, an apprentice at the Atlantic Aviation Group in Shannon.

A year-long work placement at the Ritz-Carlton in Wolfsburg, Germany, inspired Alina Sile to apply for the National Skills Competition in March, which she won.

She competed in four modules in Brazil last week: fine dining, banqueting, casual dining and bars. She was judged on her prowess in skills such as carving salmon tableside and identifying 30 different liqueurs and spirits by smell alone.

“On top of all these tasks, I have to socialise with all the guests to make sure they’re doing well. I’m even marked on how I interact with other competitors and the judges. It’s important in the industry that you get along, not only with guests, but also with your colleagues,” she said.

Ms Sile spent the summer training with her mentor, Ray Cullen, head of the department of languages, tourism and hospitality at Waterford Institute of Technology.

“Alina had been lined up for a job in Ashford Castle, to give you an idea of the level she’s achieving,” he said.

“The WorldSkills gives young, enthusiastic people in craft skills and apprenticeships the opportunity to benchmark their ability against the best in the world and to be the best they can be.

“It’s very good for us to showcase the skills that are in Ireland and the abilities of our young people.”

Minister for Education and Skills Jan O’Sullivan congratulated the team yesterday, saying they had shown “that young people from Cork to Cavan, and from Meath to Mayo, can rise to the top of their fields when we put the right opportunities in place”.

Minister for Skills, Research and Innovation Damien English said the team represents “the fantastic skills and talent that our apprentices and trainees have to offer”.

It is something John Twohig, chairman of the Ireland Skills Council, an organising body for WorldSkills, says is “a late move” but a welcome one.

“Most of the bigger countries in Europe – the Dutch, Finns, Swedes, Germans, English, Swiss, Italians – all of those would have a very broad vocational training programme,” he said.