Irish university graduates earn more from degrees than in UK

Study shows students receive €100,000 more over lifetime than if they had forgone degree 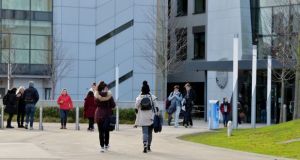 UCD: The report was commissioned by the Irish Universities Association, which has been highlighting what it says is the absence of a sustainable funding model for Irish universities.

Graduates from Irish universities stand to earn a slightly higher wage premium compared with graduates from some of the UK’s most prestigious universities over the course of their lifetime, according to new research.

The average lifetime net premium for an undergraduate degree holder from an Irish university has been estimated at €106,000 by research firm Indecon.

This 24-member group includes the University of Cambridge, Oxford and the London School of Economics.

These figures are net of tax and factor in the costs incurred by students in obtaining their degrees and income forgone during their years at university.

The details are contained in the first ever socio-economic impact research undertaken on the role universities play in the economy.

The report was commissioned by the Irish Universities Association (IUA), which has been highlighting what it says is the absence of a sustainable funding model for Irish universities.

While the State invests about €2 billion into the higher education system each year, the report estimates that the Irish economy benefits by almost €9 billion from Ireland’s seven universities.

This is generated from a combination of premium on graduate earnings, the impact of research and income from overseas students.

It confirms that university graduates generate an income premium significantly beyond those with no third-level education and have consistently lower unemployment rates, even during the recession years.

The report also examines the impact of higher earnings among the cohort of new entrants to Irish universities last year.

It estimates that an individual undergraduate degree holder will generate a net gain for the exchequer of €62,000 over their lifetime in today’s money, when all costs to the exchequer are taken into account.

Similarly, it estimates that Irish universities make a total research impact of €1.5 billion to the economy.

However, he warned that a 50 per cent increase in student enrolments since 2000 was a precursor to an even greater demographic bubble which would place an “intolerable strain on the already under-resourced university system”.

“Unless the Government and the broader political community are prepared to deliver a sustainable core funding solution, the opportunities afforded to today’s students may be curtailed for many current and future primary and secondary students. As a society, we cannot let this happen,” Prof MacCraith said.

Alan Gray, managing director of Indecon, said Ireland had a more highly educated population than the EU average, which is often cited as a key reason both multinational organisations and indigenous enterprises base operations here.

“Our analysis shows the positive impacts that universities have on research and innovation, on graduates’ earning power and on the positive returns to the exchequer for their investment,” he said.