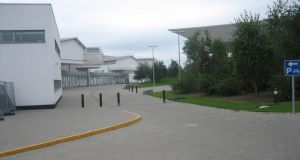 Since the Institute of Technology in Blanchardstown arrived in 1999, the number of school leavers in the Dublin 15 postal district who progress to third level has risen from none to almost half. Photograph: Harold Strong/Geograph.ie

Before the Institute of Technology in Blanchardstown arrived in 1999 there were pockets of the community where no school leavers went into higher education.

More than a decade and a half later, almost half of all school leavers in the Dublin 15 postal district progress to third level.

Dr Mary Meaney, president of IT Blanchardstown, says while much work remains to be done to increase this, the institute has played a crucial role in raising expectations for school leavers.

“We’re aware now of students who are coming here who did, for example, a robotics summer camp here years ago when they were in primary school,” she says.

“They say: ‘I didn’t know this was a place I could come to until I did that course.’ It’s opened up the possibility of higher education for many.”

The college has built close links with primary and secondary schools. In addition, the open nature of the campus makes it feels like it is accessible to the wider community, she says.

“The issue of access isn’t an add-on for us,” she says. “It’s at the very heart of what we do.

“It’s about the design and culture of the institution. We offer opportunities to study that are flexible – full-time or part-time – and we support students once they get here.”

As few as 5 per cent of students come through an “access” route in which students benefit from lower points requirements. It also offers mentoring to students to help ensure they can cope with the rigours of third level.

It is a similar story at IT Tallaght, where about a third of all school leavers locally progress on to higher education, a significant increase over the past decade or so.

Colm Downes, access officer for IT Tallaght, says the institute has worked hard to spread awareness about entry schemes and grants for students and parents.

Third-level students also volunteer their time with local Leaving Cert students to help them in subjects such as maths.

“The Leaving Certs are bussed down here after school and they get one-to-one support,” says Downes.

“It’s increasing a students’ chances of doing better in exams and they are getting a taste of higher education.”